Buyers are approaching the liquid zone, in which sellers with great desire begin to sell. When the price touched the trend line, the volumes increased and the pins appeared. Also, this price zone coincides with the upper trend line of the triangle, where the price is traded from November 2018.

One more week ended where the buyers decided to check the strength of the sellers. The whole week, the price was traded under the level of $3,988 and buyers did not have enough strength to stay above this level. However, the sellers did not try to continue to fall. From Friday, buyers still managed to break through the local level and test the upper trend line of the triangle. How did this happen?

The breakdown of the level was on small volumes. After the breakthrough, the sellers did not try to bring this level under control. It is perfectly visible on the volumes of a red candle below the price of $3,988: 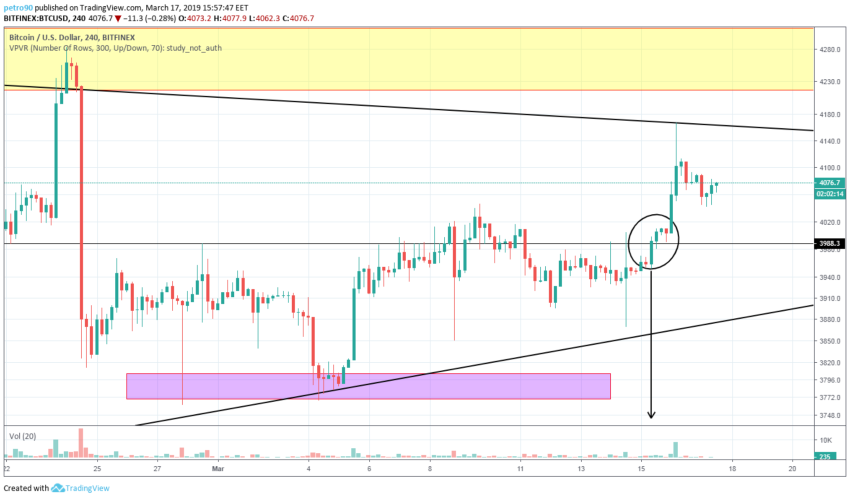 This fact seems suspicious to us, since buyers have not been able to break through this level for a whole month, and on 15 March, they have made it without obstacles.

The main volume of this week was recorded on 16 March in the process of testing the upper trend line of the triangle. Let’s consider the situation on the 15-minute timeframe: 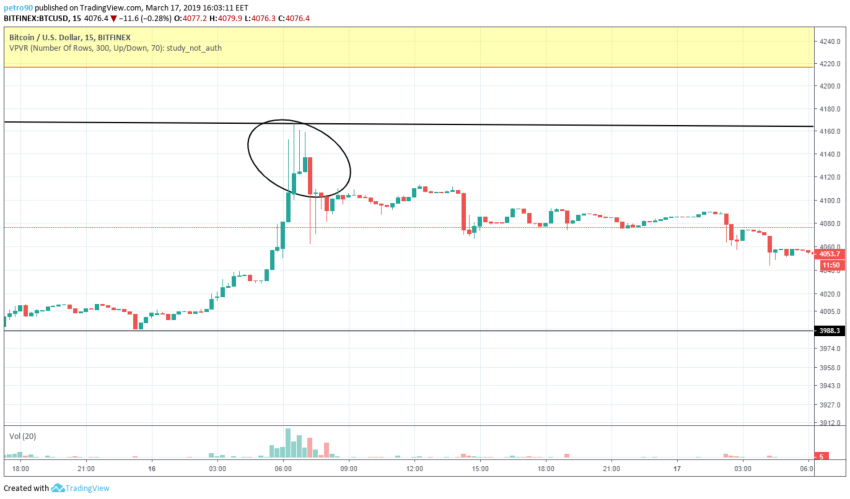 Therefore, given the nature of the movement and the quantity of volumes this week, we think that the probability of breaking the triangle upwards and continuation of a strong rapid growth remains unlikely.

If we analyze how, during four months starting from November, buyers are trying to build their attacks, it becomes clear that every subsequent attack grows weaker: 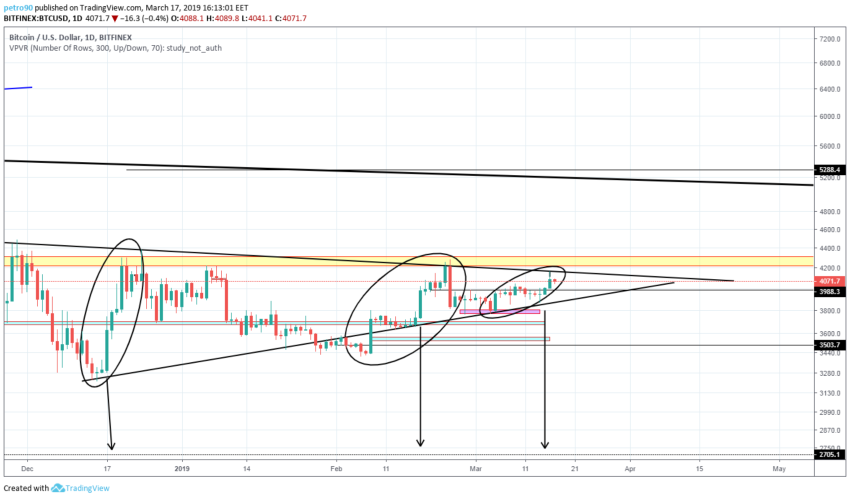 Pay attention, how aggressiveness and volumes are decreasing during each growth attempt. The impression is that sellers are simply exhausting buyers before a new fall wave.

This is another fact in favor of sellers.

Marginal positions of buyers decreased this week. However, at the moment of the test of the trend line, the buyers believed in the chance of breaking the triangle up and began to open their positions emotionally, after which it would be equally emotional to close them: 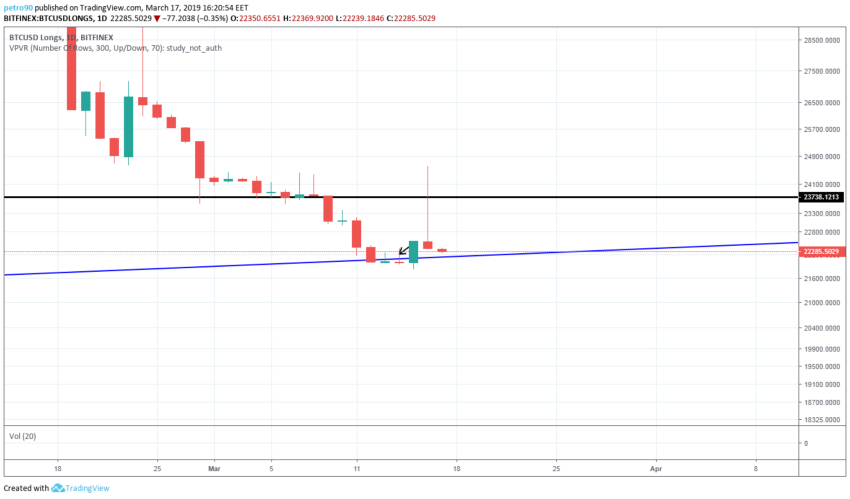 Sellers have been increasing their positions for the second week in succession. This happens on the growth of the coin. This testifies to their confidence that the fall will still continue: 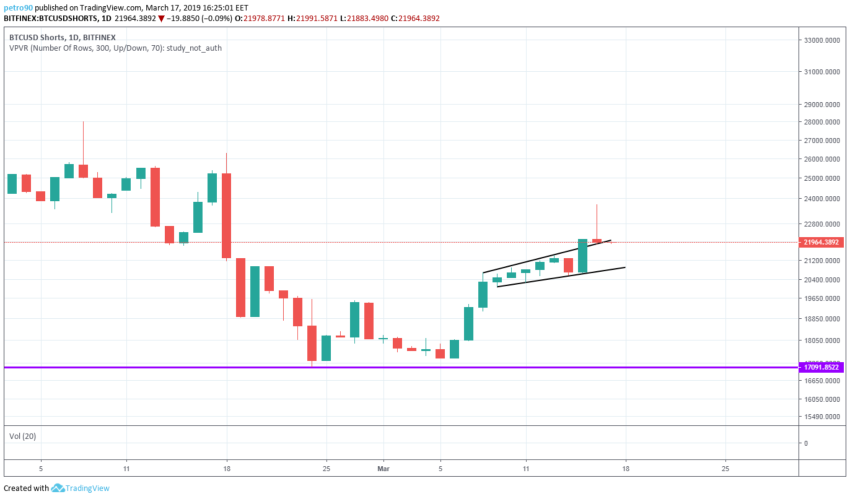 According to the wave analysis, globally, the wave Y continues to form now. At the price of $4,360, the wave W = Y * 0.5. Now the price is under this level. And if buyers can not break through this price, then the global prospect of continuing the fall will be up to $2,650: 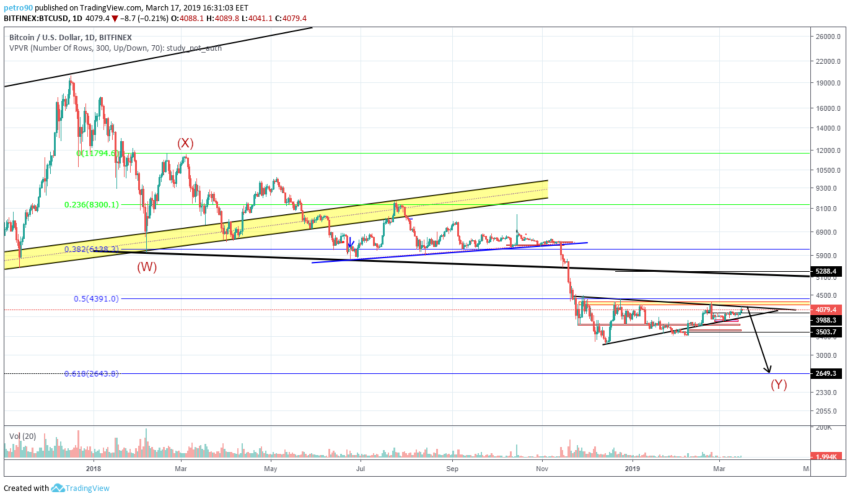 Therefore, until buyers aren’t acting with increased volumes and a positive mood, we will not believe in the future of the change in the annual fall trend and in the best case, expect the continuation of consolidation within the triangle maximum until the beginning of April.