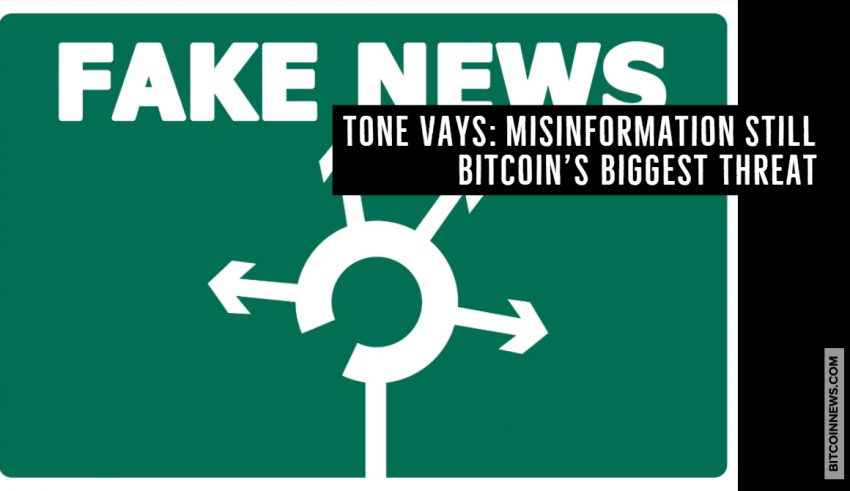 Crypto influence Tone Vays has said in an interview with CryptoGlobe that Bitcoin’s greatest threat was misinformation, a view that he has held since 2014. He said this as part of a discussion on the threats to Bitcoin and the roll out of second-layer scalability upgrade Lightning Network.

“In 2014, I wrote a blog post titled “What is the Biggest Threat to Bitcoin?” my answer back then is the same as it is now “misinformation”. It is much worse today as we now have people that think Bitcoin Cash or Bitcoin SV is Bitcoin and supporters of Ripple and Ethereum try to convince the world that their useless tokens are better than Bitcoin.”

Vays also warned that after misinformation, global government crackdowns would probably be Bitcoin’s most alarming threat. He believes that a scenario was possible where the majority of developed nations would criminalize people simply for using Bitcoin to perform anonymous transactions. While Bitcoin was not an anonymous cryptocurrency, it still provided a great deal of privacy.

Asked if he thought that bringing full anonymity features to Bitcoin would harm adoption, Vays thought so. However, he believed that this should not prevent anonymity from being a default feature of Bitcoin in the future, and that opting out should be simple:

“There are many functions that should not require anonymity and the future for Bitcoin would be brighter if say one-day Tax Revenue is routed through the Bitcoin network with full transparency. In addition, while Bitcoin is still growing, it makes it less confrontational to governments without full anonymity at the moment.”

Meanwhile, who appeared in documentaries Magic Money and Bitcoin – Beyond the Bubble, maintained his excitement about Lightning Network’s potential for Bitcoin:

“It would allow Bitcoin to be spent instantly, privately and cheaply at sub-penny scales. The implication of this are enormous for mass adoption. It will also mean that all other cryptocurrencies are not needed increasing payment efficiency.”