It’s time to sum up the weekly Bitcoin trading. The sellers could not keep the critical price zone of USD 8200- USD 8300, which we wrote about in the previous analysis, after that the price began to grow freely and quickly reached the USD 9200 mark and now is traded even slightly higher than this price. Starting from 5 June, there was consolidation in the market, which based on signs of weakness of buyers, was more likely to break down. However, our alternative scenario worked and in 3 days buyers raised the price by 13%.

If we analyze the situation on the 4-hour timeframe, we see that during the fight in the price zone of USD 8200-USD 8300 sellers could only stop the price, but they did not even try to lower the price below this price zone, and buyers simply bought out all the sellers offer in the price zone, after which the growth of prices substantially accelerated, breaking the black trend line: 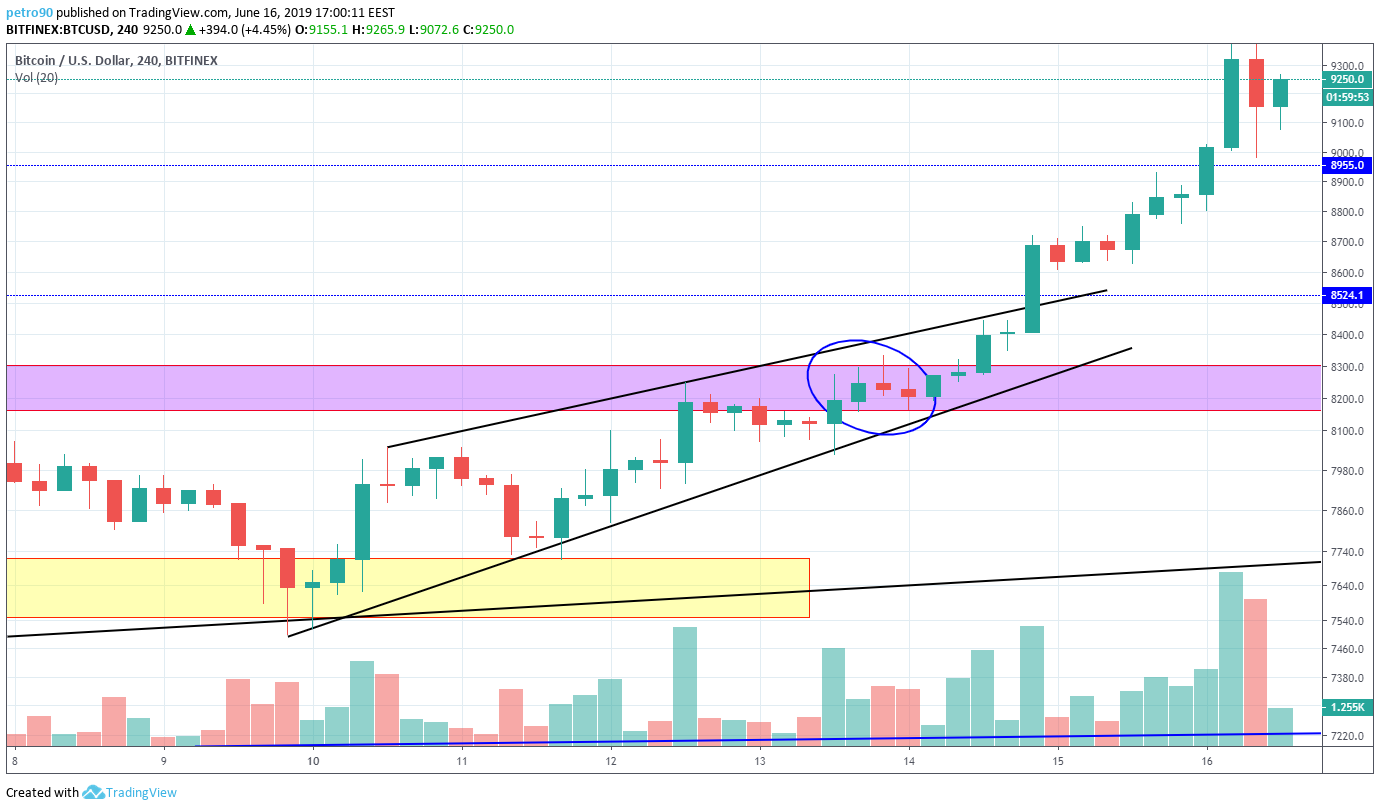 The local culmination of trades took place around the price of USD 9200 – the final target of our alternative scenario. If we consider carefully what happened in the range of USD 9000-USD 9300, then we can see that volumes began to increase from USD 9050, and in the price zone of USD 9240-USD 9330 some buyers began to fix profits sharply, causing a sharp price fall from USD 9370 to USD 9000 during half an hour: 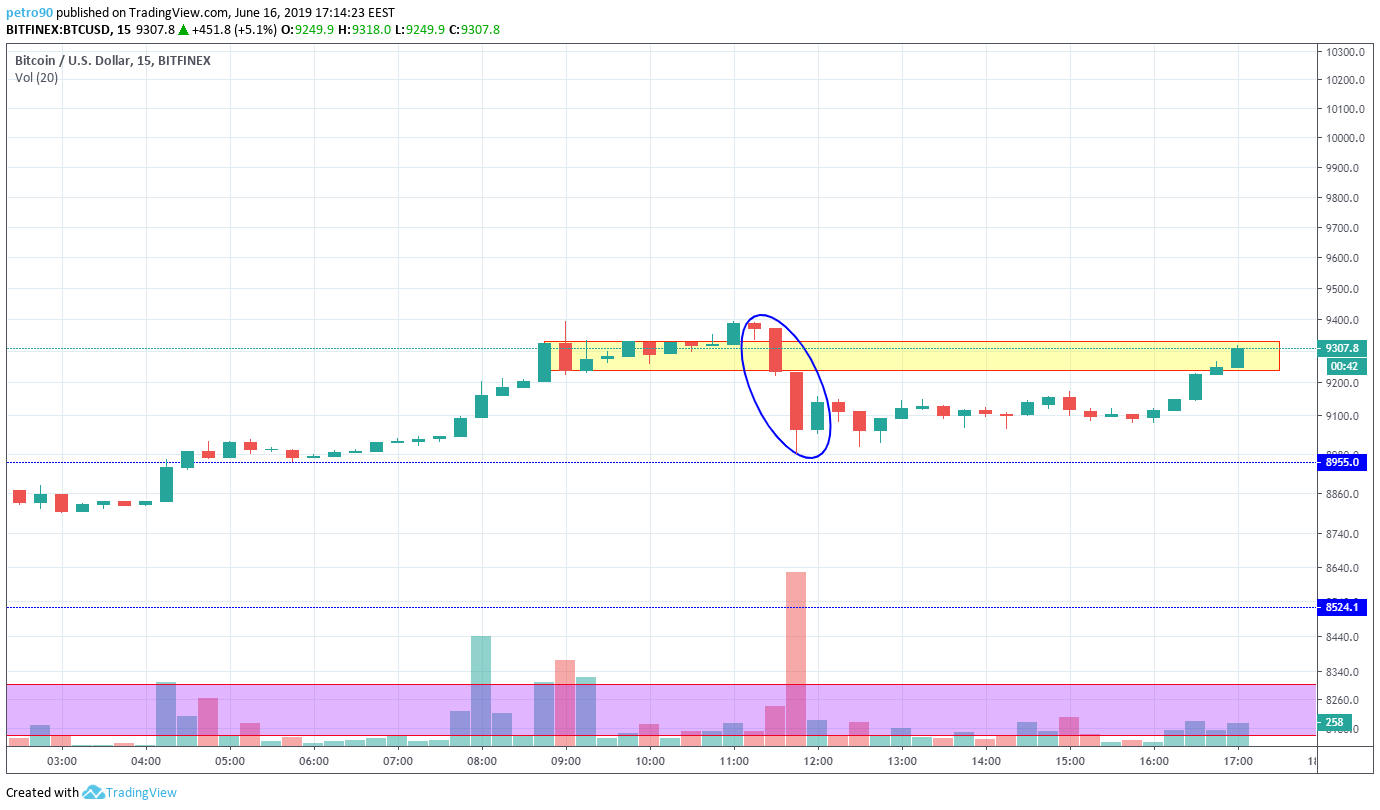 However, if you compare this event with the chart of marginal buyers positions, it becomes clear that buyers are quite confident in the market and did not react significantly to a sharp fall: 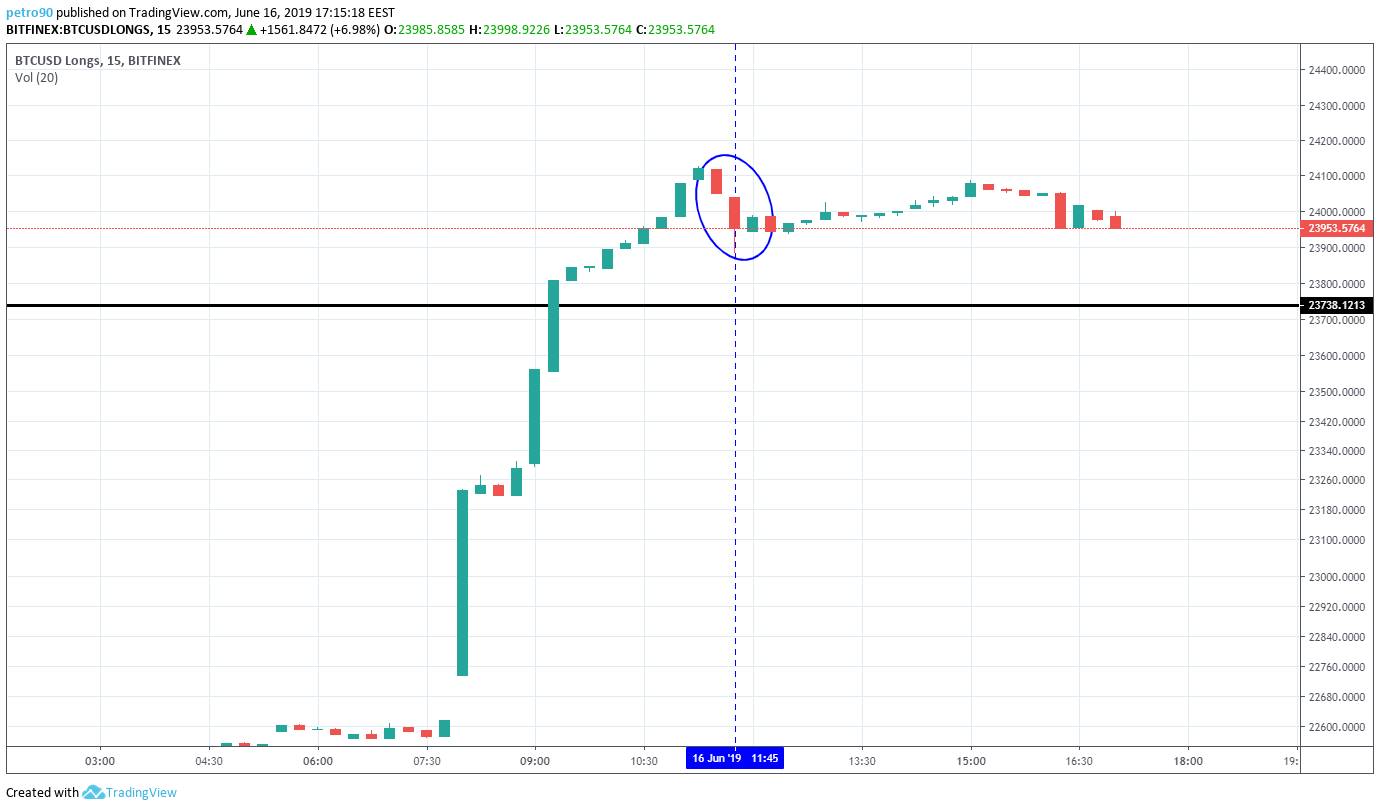 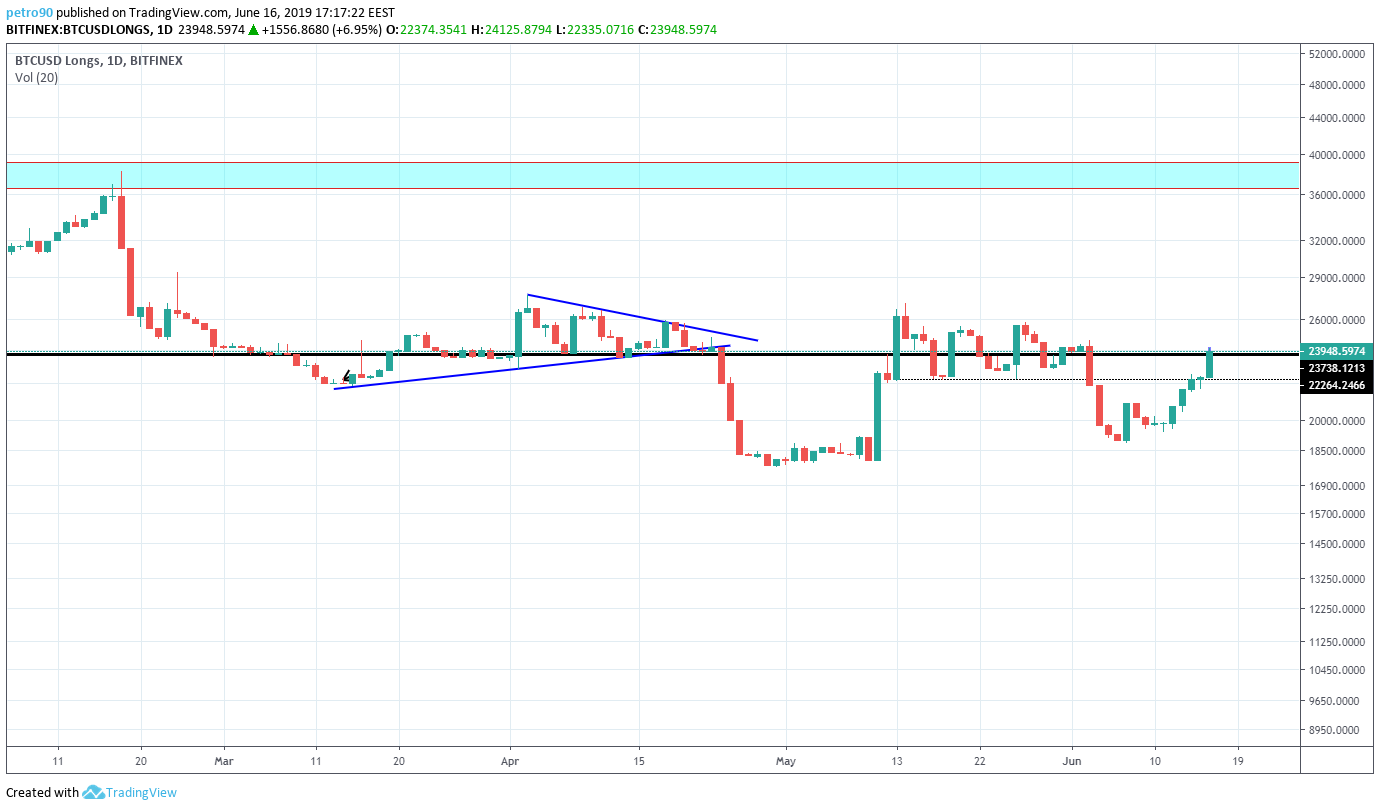 Sellers marginal positions were a week in consolidation. Sellers obviously do not feel good on the market, which is growing since December 2018 practically without correction: 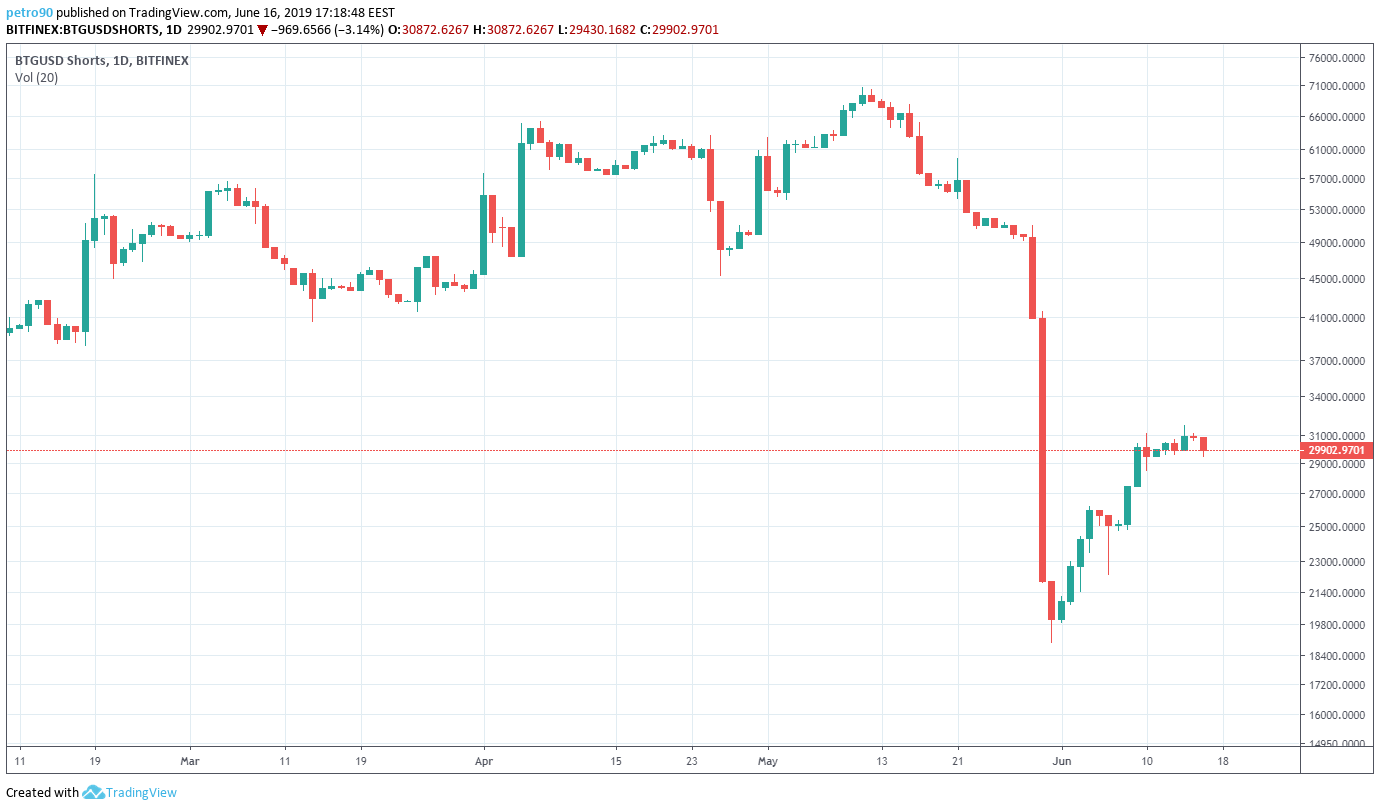 In fact, today buyers have updated their local high, which before that was USD 9109, and actually corrected the global wave of fall from December 2017 by 38.2% over half a year.

According to the wave analysis, we think that now the wave(3) is finishing and no higher than USD 9600-USD 9700 should begin the correction with two targets USD 8300 and a final USD 7300: 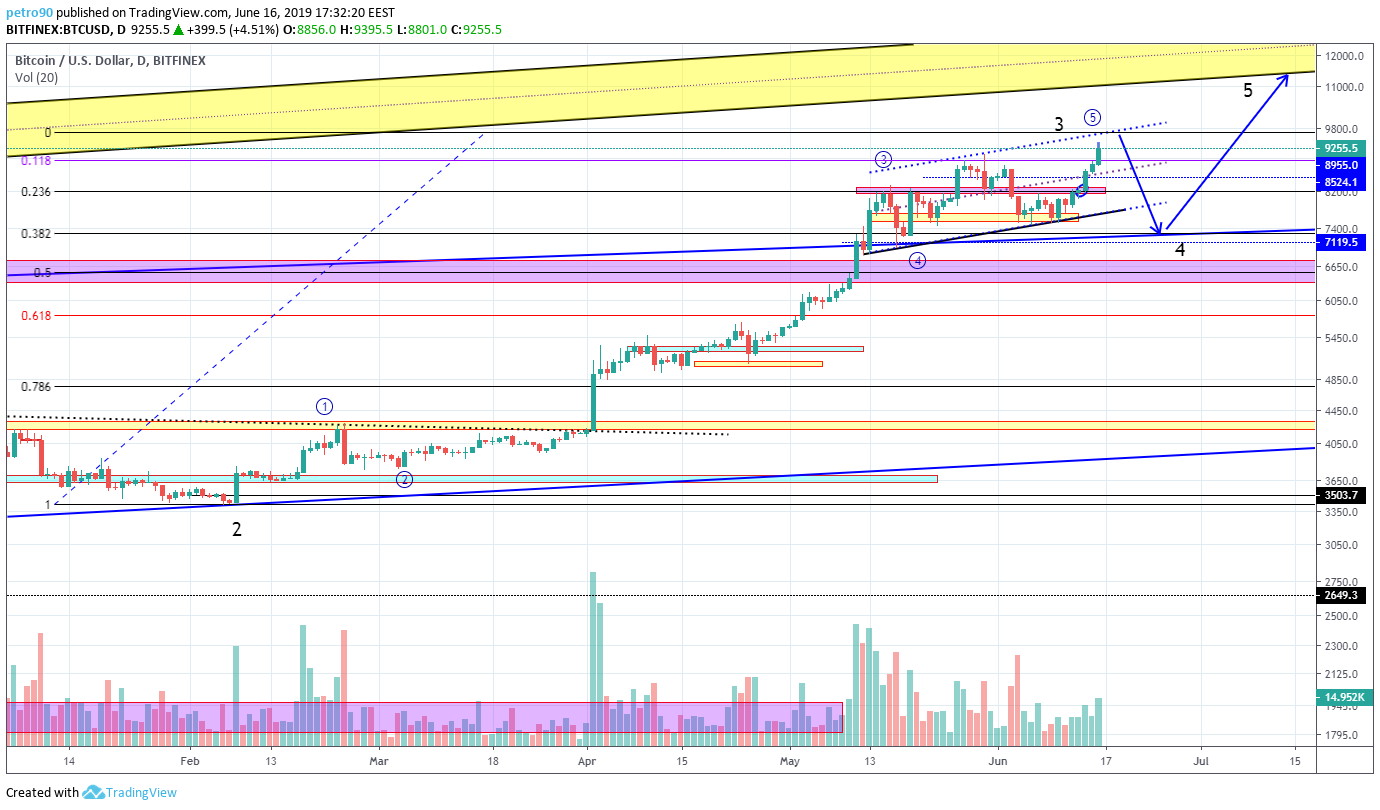 The last wave of growth on 13 May moves in a channel that more resembles an angle wise consolidation than a strong trend. Given that other coins are growing not as vibrant as Bitcoin and some even fall, we conclude that the volumes from other coins are converted into bitcoin. Therefore, we think that this is the last buyers attack, after which the correction will begin with the targets set above. To work out our main scenario, sellers need to fix below USD 8500. Let’s see if it is going to happen next week!