After the phenomenal closing of a weekly candle at a price of $10,925, buyers have created a good atmosphere of confidence in the continuation of growth. It is the second weekly candle, which shows an average growth of 20%. After a sharp growth and test of the price $11,200 through which the trend line passes, the length of the candles significantly changed and the price deceleration is clearly visible: 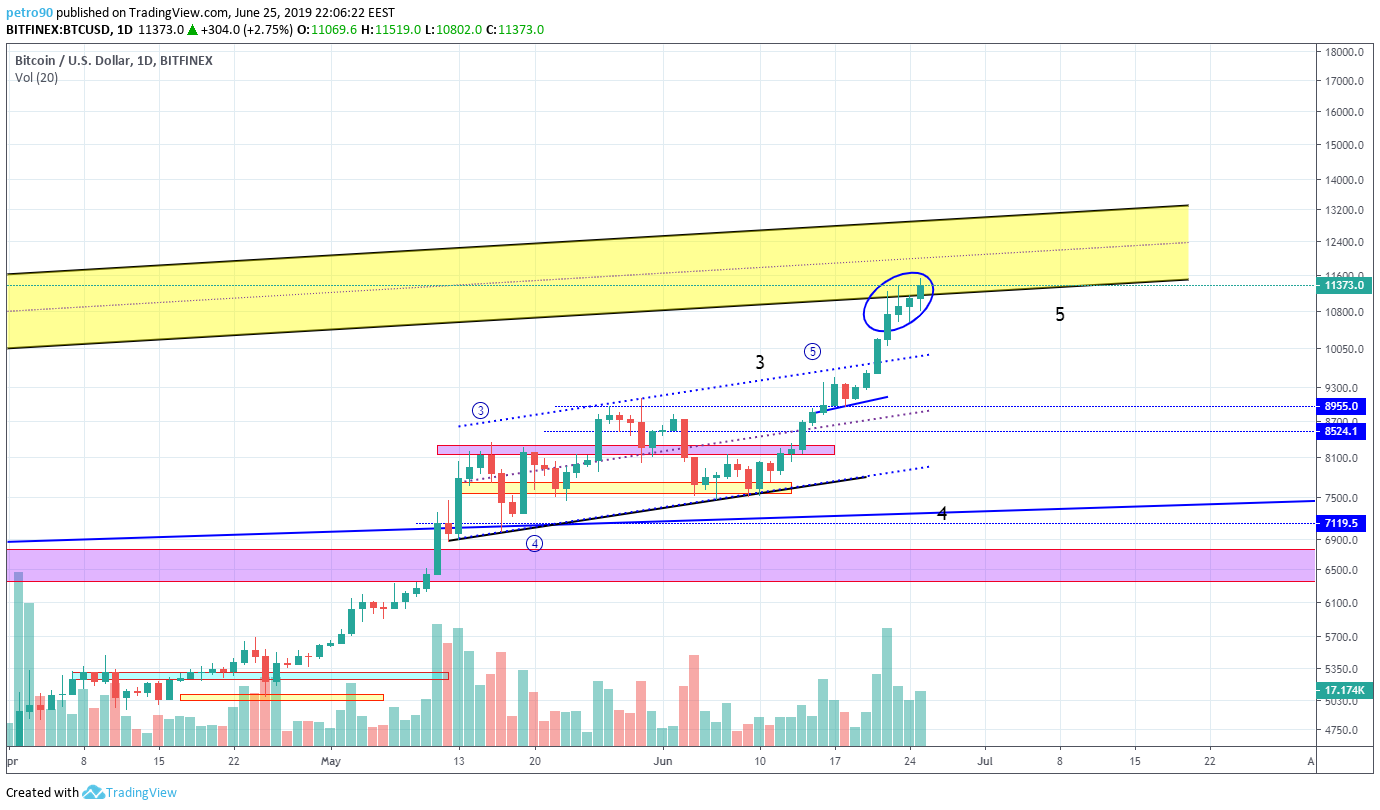 In addition, we see that the volume is not the smallest. Buyers got to the narrow yellow channel of the price movement, which once was a support for them and this channel sustained many sellers attacks. Sellers broke this channel in June 2018 and after its test, the price continued to fall: 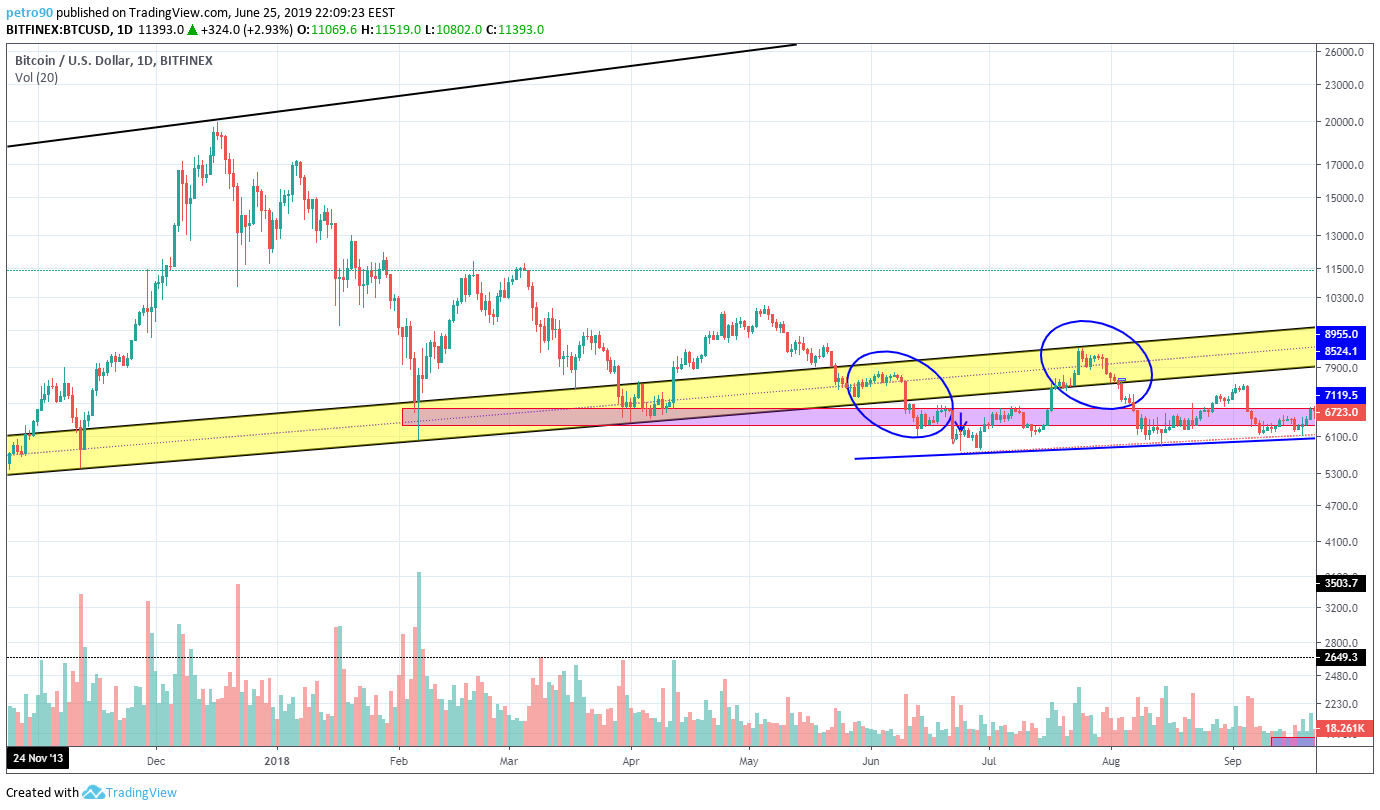 Now, we think that there is a high probability of price stop in the yellow channel.

On a 4-hour timeframe, we see increased volumes at local highs, but so far, buyers are ready to buy the whole offer of sellers when a counterattack begins: 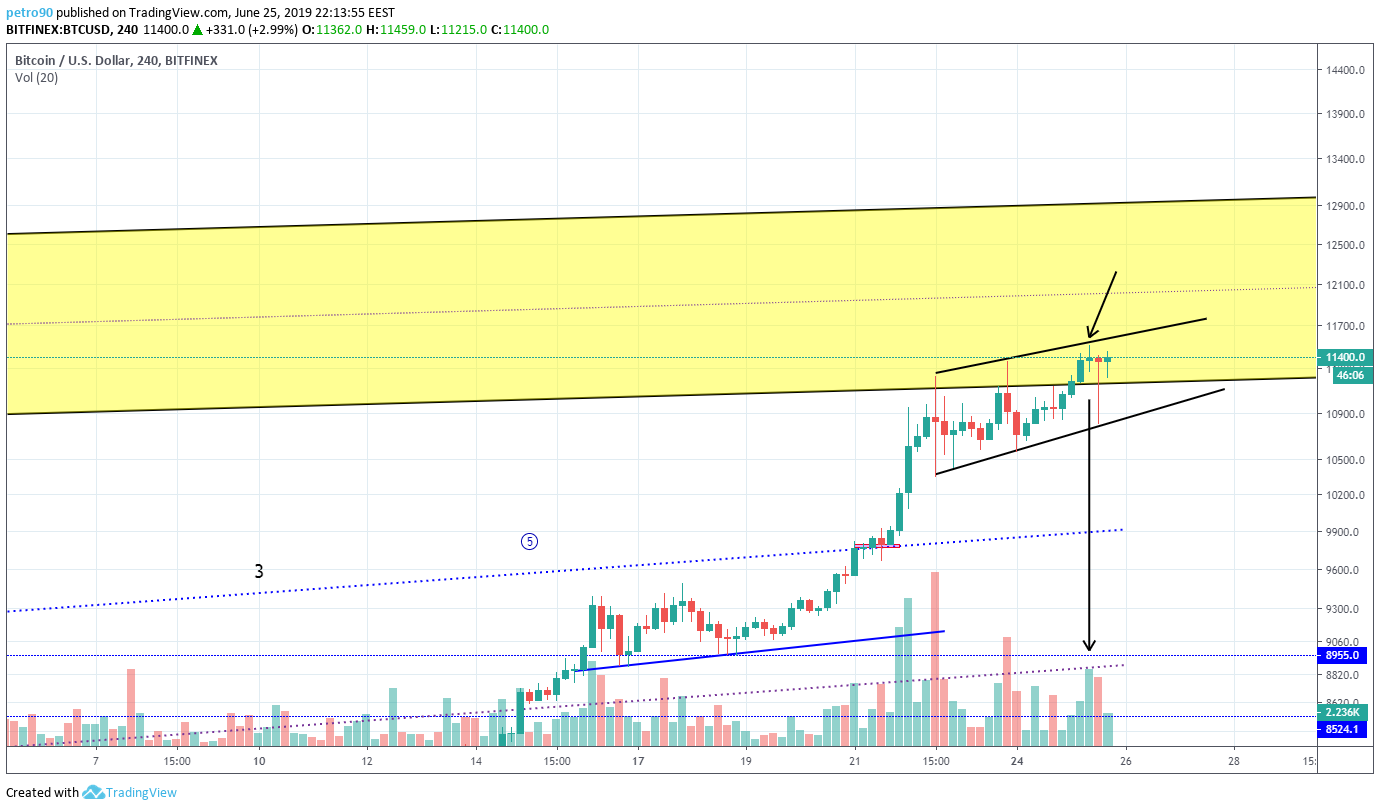 Also, there is a tendency that volumes are decreasing in the newly-formed consolidation and local highs are updating. It is a signal to start a possible correction.

Another signal to the possible Bitcoin correction is the depletion of other coins. We noticed that during Bitcoin growth, other coins behave passively (only some coins grew, but it is more likely to be an exception). However, while Bitcoin attempts to fall, other coins react rigorously to this signal. It suggests that investors from other coins are throwing money into Bitcoin and with a likely fall there is a chance that the market will suddenly collapse again.

The portion of probable negative is over and we will analyze the mood of the buyers. Marginal buyers positions continue to grow: 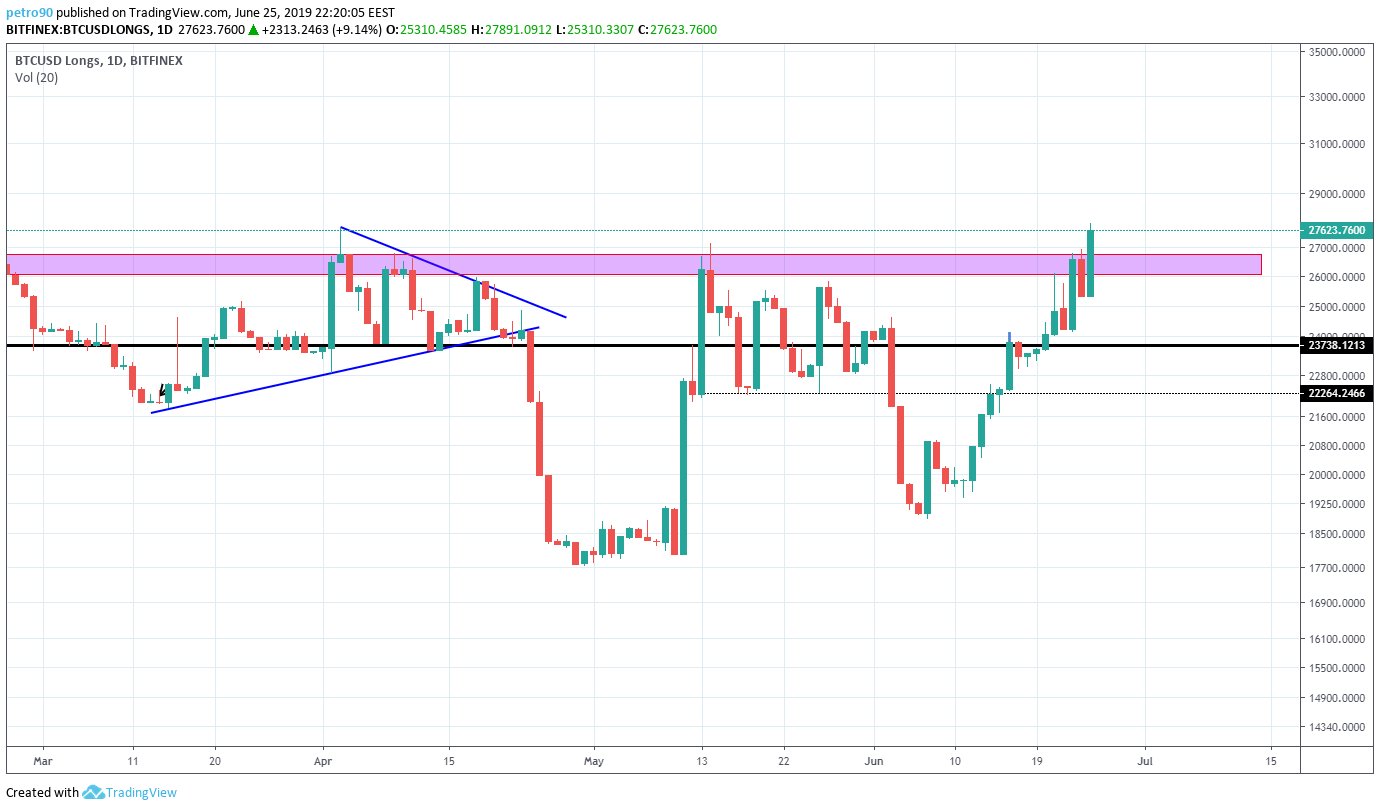 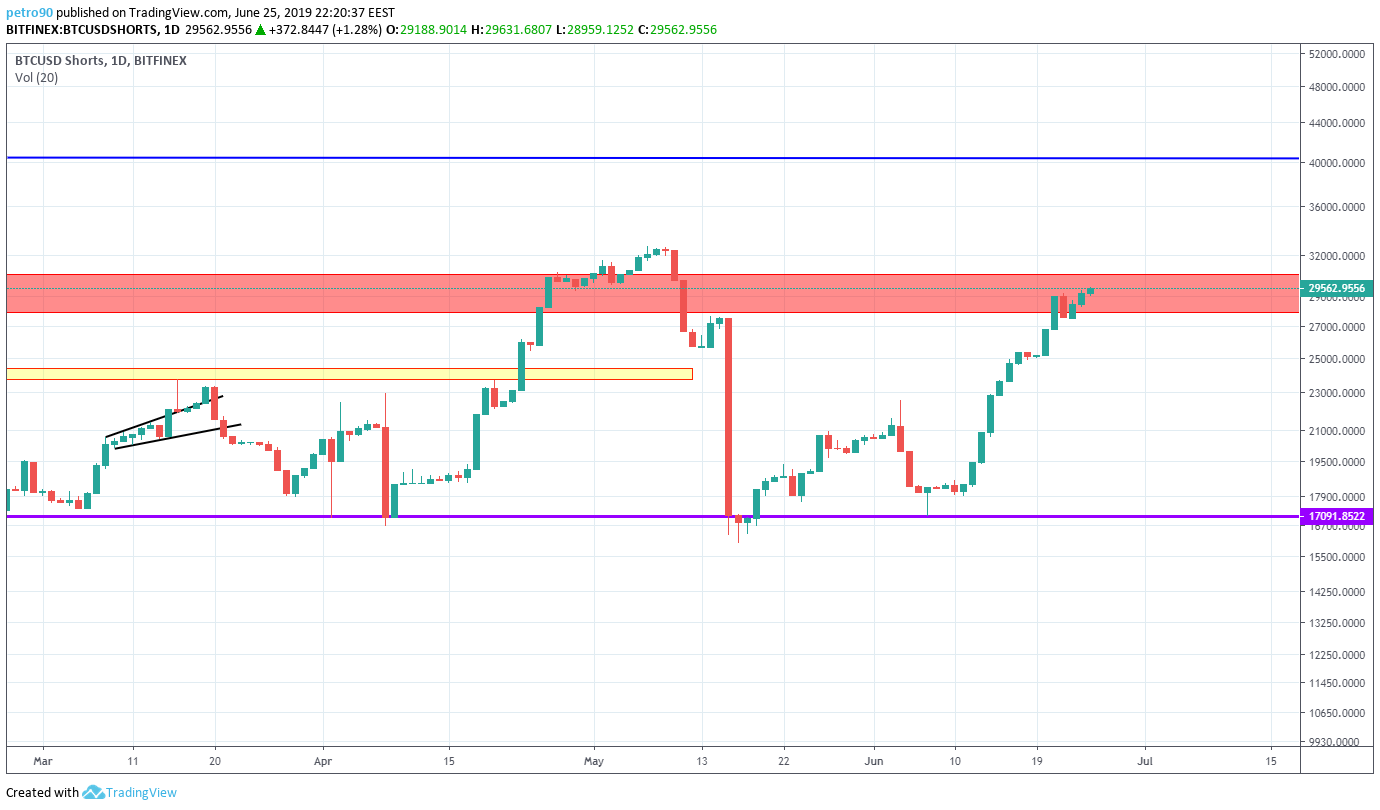 In this situation, you should expect a strong sharp price movement. It’s still not clear to which side. Everything depends on the weekly candle closure.

According to the wave analysis, the 5th wave continues its formation and now buyers are fighting with the level of Fibonacci 0.618 at a price of $11,100. If buyers will fix above this level on a weekly timeframe then the next target may be $13,300: 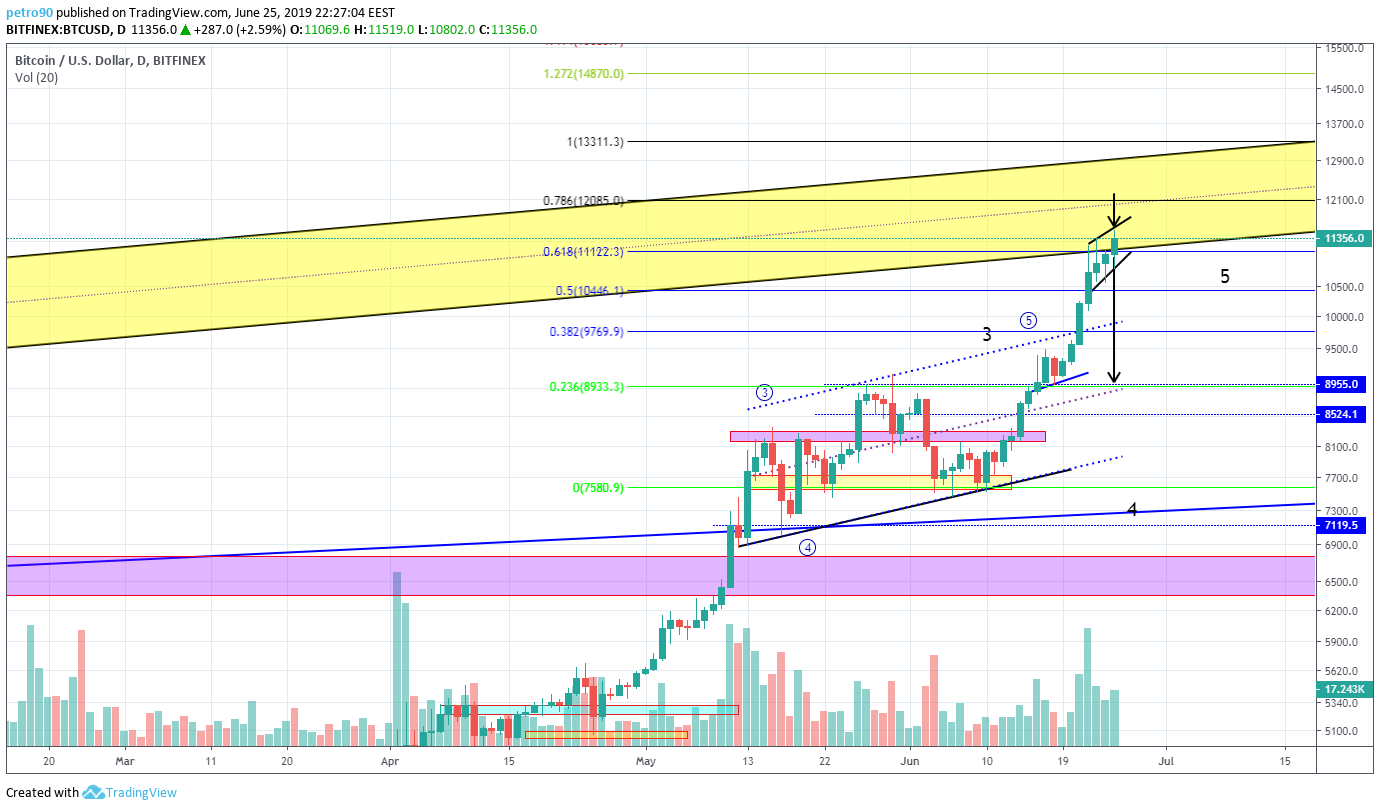 However, at the moment, the price is in consolidation and on Thursday we will see whether it will be possible for buyers to continue their growth this time.