It’s time to summarize the trading week on Bitcoin and understand whether the situation on the market has changed and whether it is possible to identify a more likely scenario of the price movement. This week the price was moving in the range of 24%. At the beginning of the week, sellers had ambitious plans, but as on 1 July and 2 July, they only succeeded in false breakdowns with a local low of USD 9728. After unsuccessful attempts by sellers to fix below USD 10400, buyers immediately the next day entered the yellow price zone and broke USD 11200. From that time until the end of the week there is a fight in the form of consolidation for the right to control the yellow price zone. This consolidation in the form of a triangle is perfectly visible on a 4-hour timeframe: 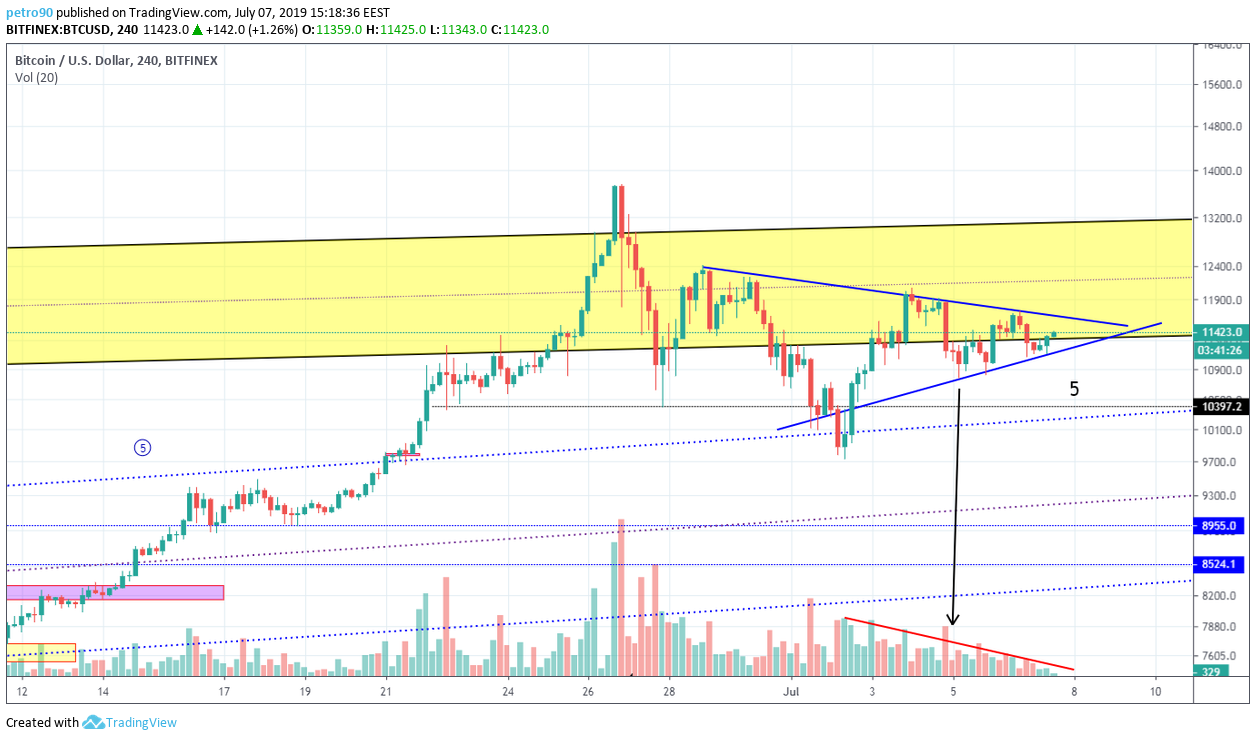 Also, note how proportionately the volumes of trades decrease, indicating that a powerful impulse is approaching, which breaks the triangle and indicates the direction of the price movement for the short term.

Since now buyers are building up their attack, we will consider the local critical point. If you draw a channel of price movement from 26 June, it becomes noticeable that in the range of USD 11700-11900 passes the upper trend line of this channel, which intersects with the upper blue line of the triangle: 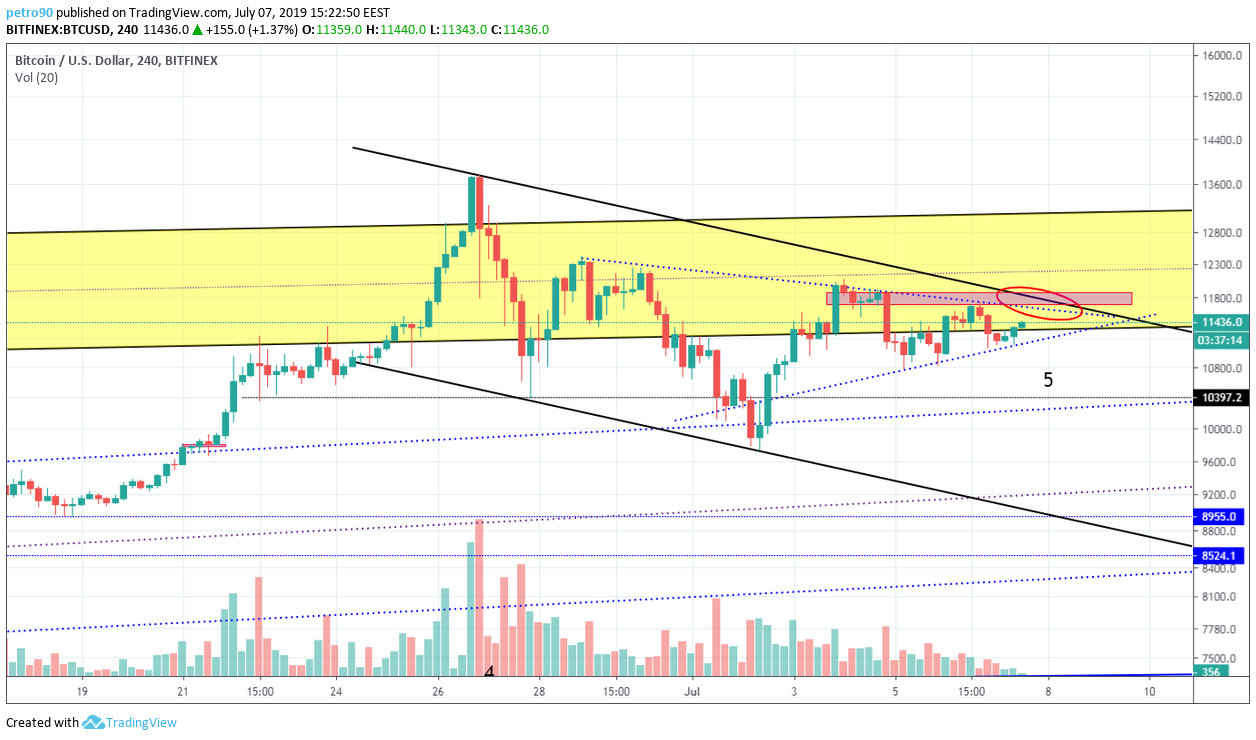 On 3 July, market participants organized consolidation in the price zone of USD 11700-11900, so breaking through this local price zone, the next local stop of buyers is at a price of USD 12250 and a final price of USD 13150 (top of the yellow zone).

However, marginal positions of buyers are decreased while the price is in consolidation: 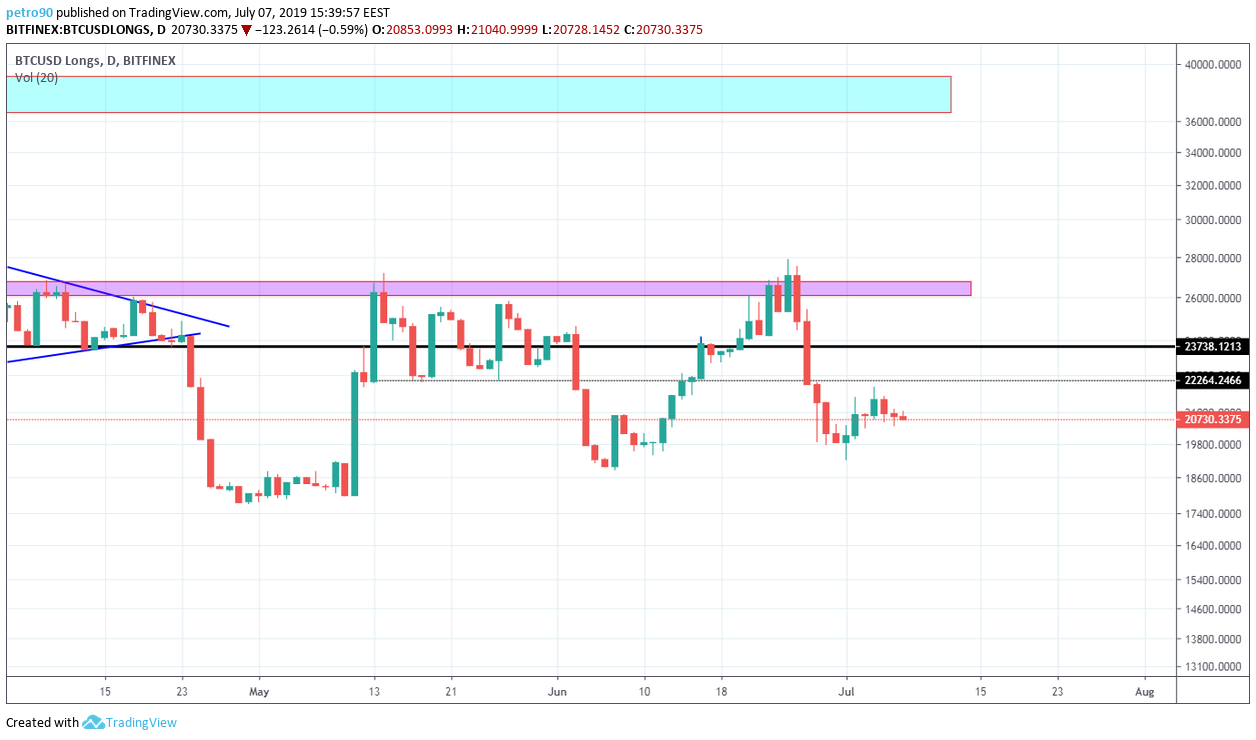 Sellers are trying to increase their positions, but in the last few days no changes are practically visible on the chart: 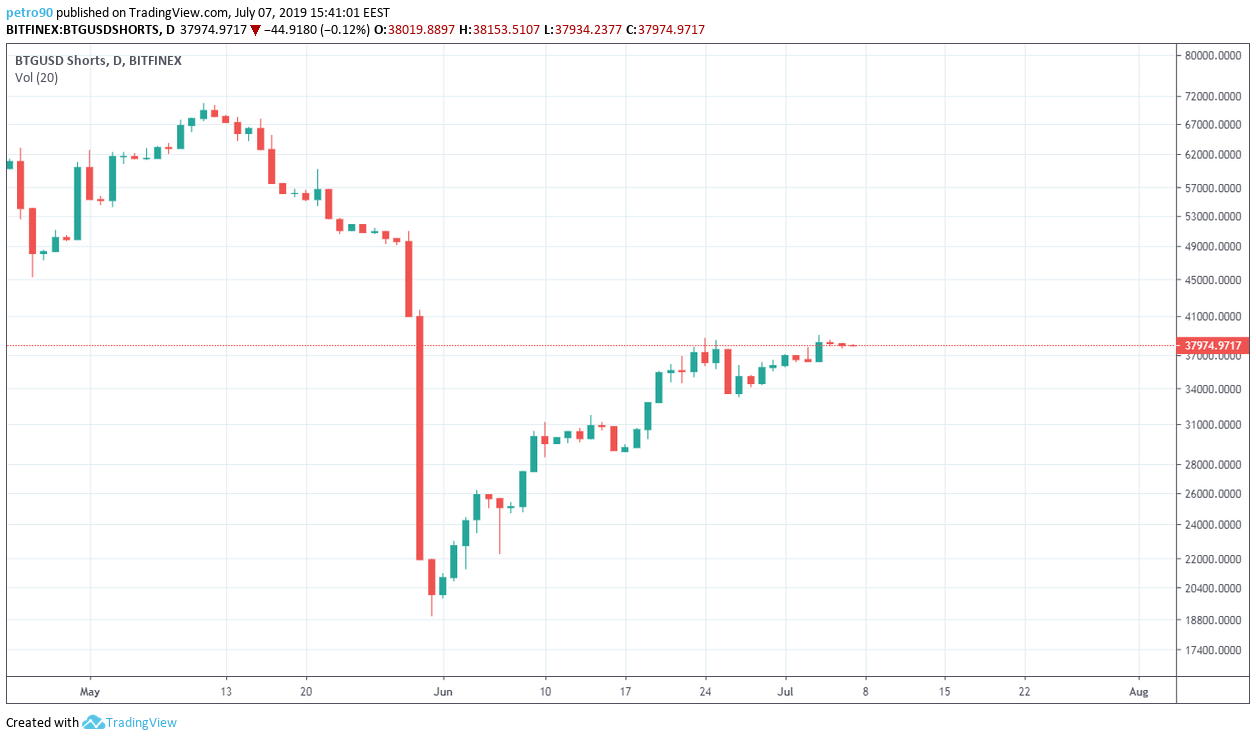 The index of fear and greed is quite high and it means that buyers still believe in the continuation of growth:

Two scenarios are currently available according to the wave analysis. Talking about the first scenario, the fall, which began on 26 June and ended on 2 July, formed a correctional model of 3 waves and now begins a new wave of growth. Taking into consideration that the wave (C) equals (A) * 0.786: 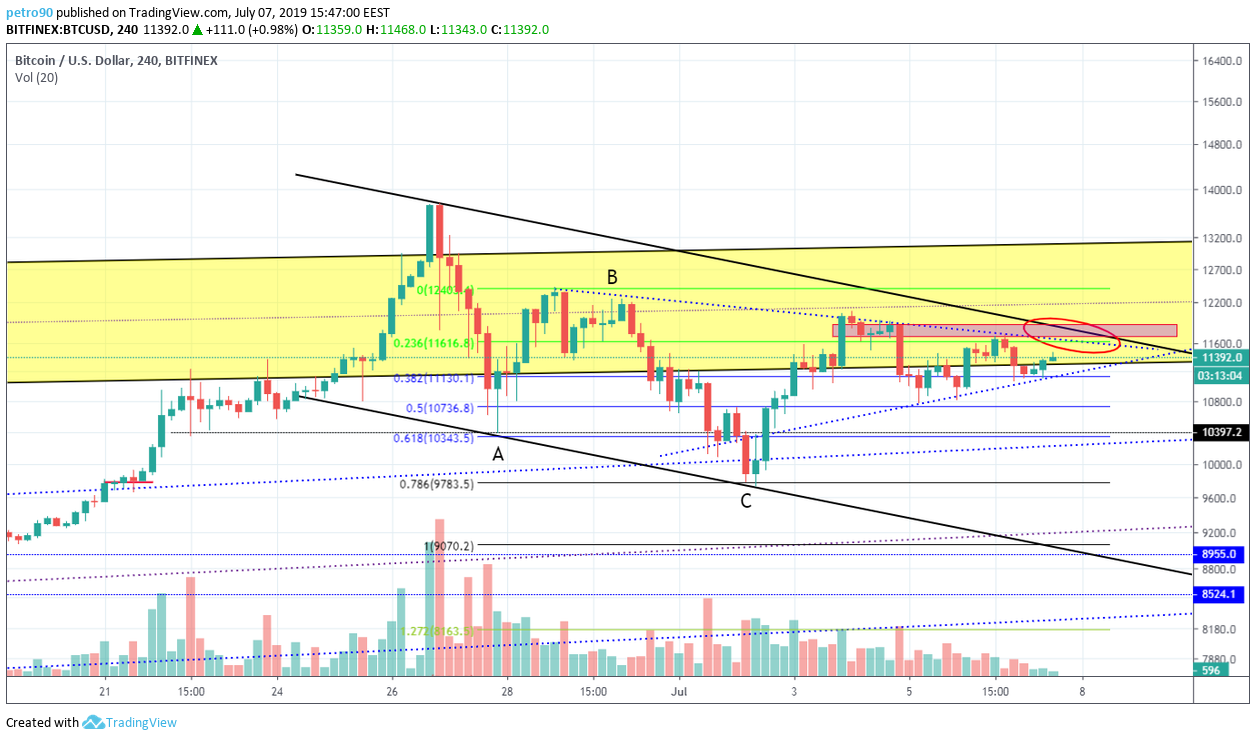 However, so far, we are closer to the second scenario.

The wave of the fall from 26 June to 2 July  (wave A) is now corrected by the wave (B) and we are waiting for another wave of fall (C): 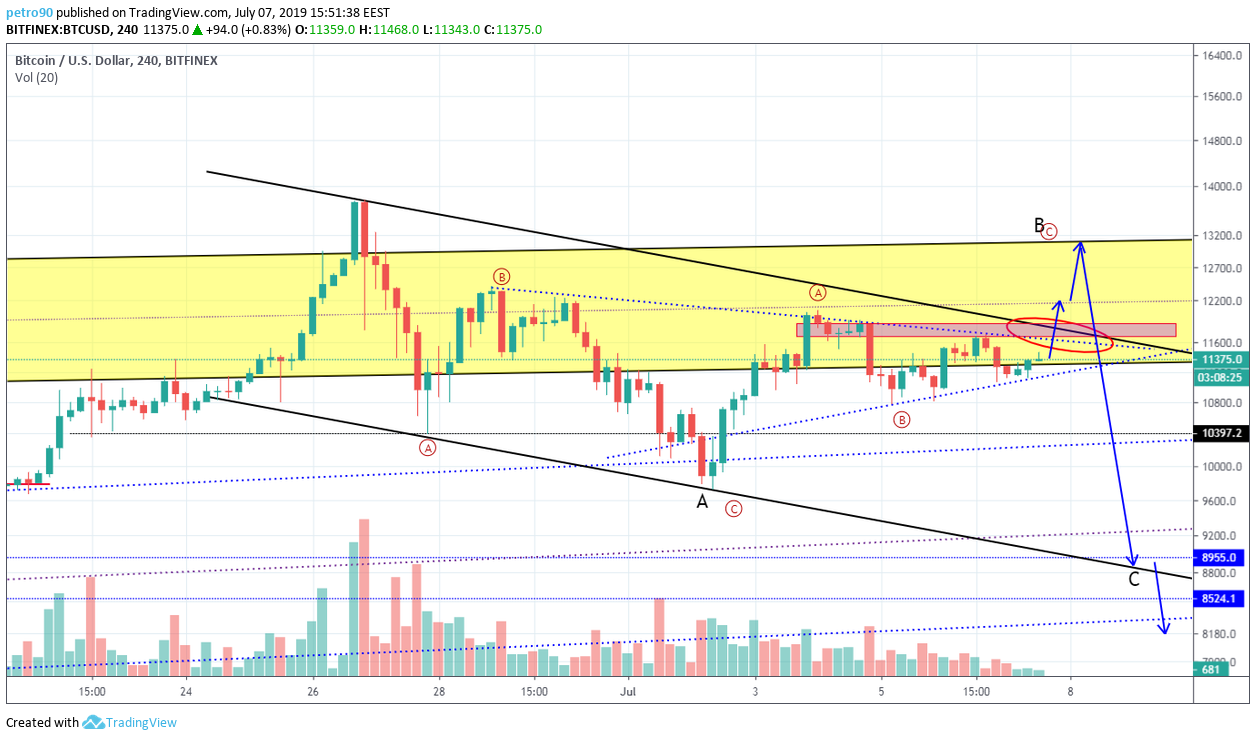 This time forecast will take more than one week, so first, we focus on to which price buyers will have power, and during the next analysis we will adjust the targets.

In general, on a weekly timeframe, we see a price stop and whether sellers will be able to take this chance we will see on Tuesday! Have a good mood and profitable trades: 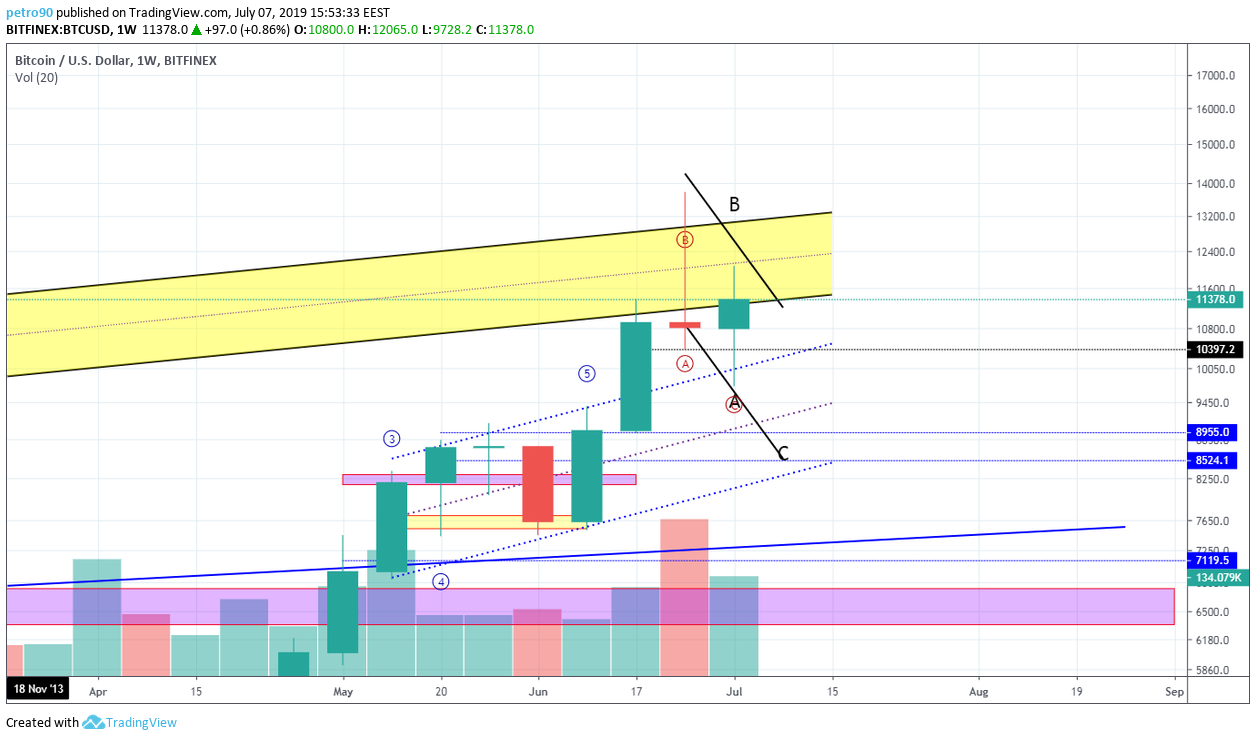