The week of waking up and activating of buyers comes to an end. After the breakthrough of the purple price zone $85-90 and the test of the bottom trend line of the growth channel, Litecoin buyers still showed that they have teeth.

Actually the new week began with a false breakdown. After which immediately on the next day, buyers at increased volumes showed their strength.

The local turnaround is perfectly visible on a 4-hour timeframe, where after a sharp movement down, consolidation happens. In which forces are redistributed and later a large candle is formed in identical large volumes: 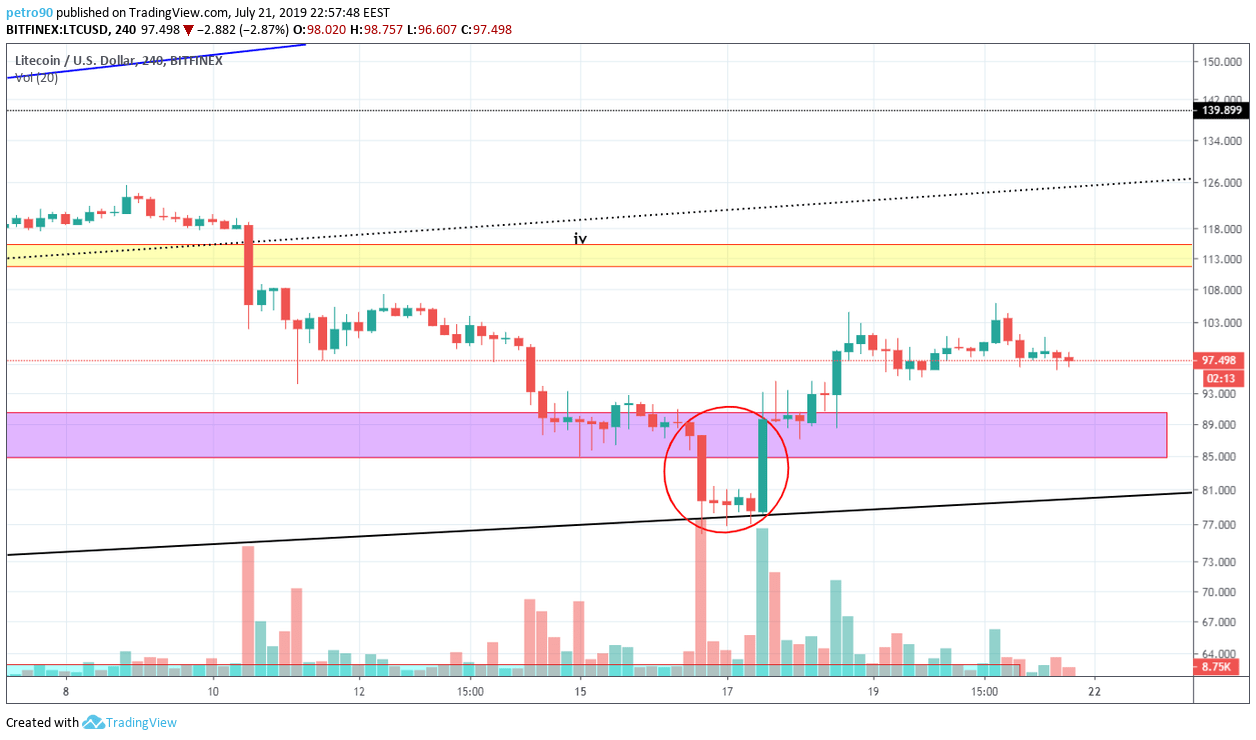 At the moment, buyers are trying to fix above $100 to continue the movement to the price zone of $112-115. In this case, the scenario we wrote about in the previous analysis is still in play.

On a daily timeframe, buyers look pretty cheerful. After two aggressive candles, buyers stopped at consolidation, which looks more like a temporary stop on the road to $112-115. It also tells us a weekly candle that shows the real interest of buyers to keep the black channel of price growth and test $112-115: 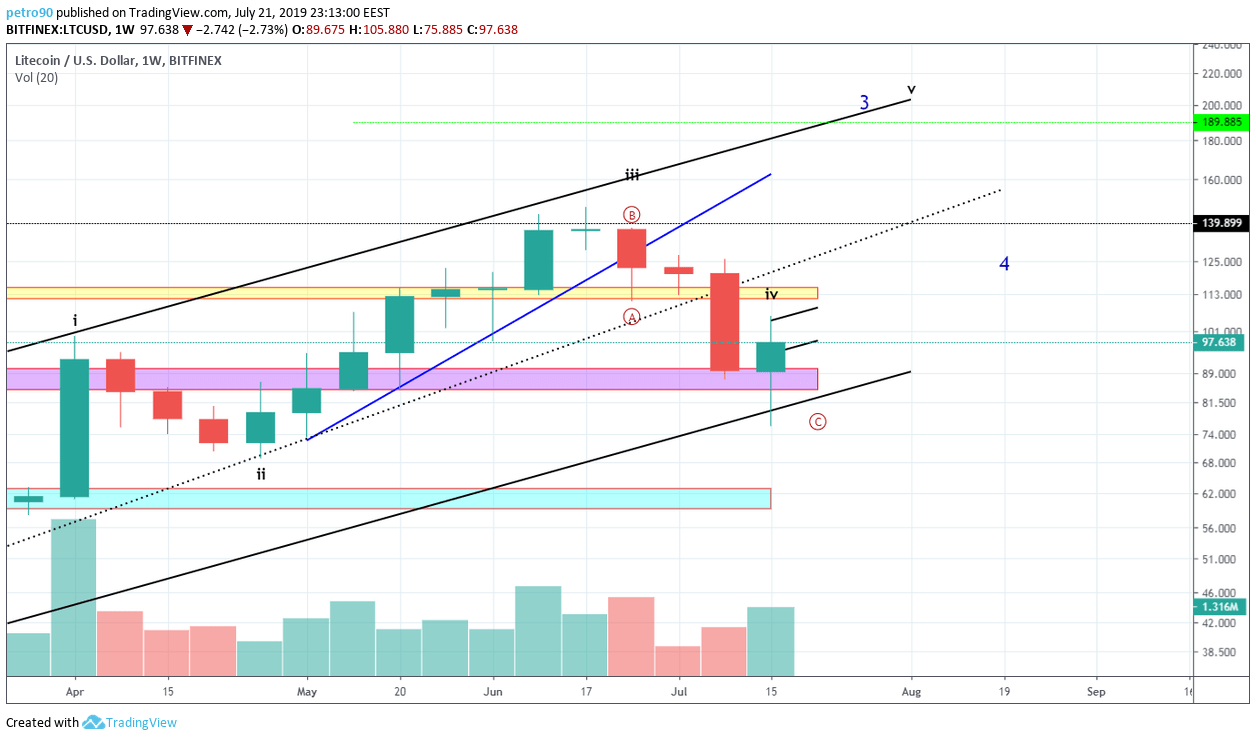 On a 4-hour timeframe, we see a consolidation. In which buyers made two attempts so far and they can not fix above $100. And each subsequent attack comes with a lower volume: 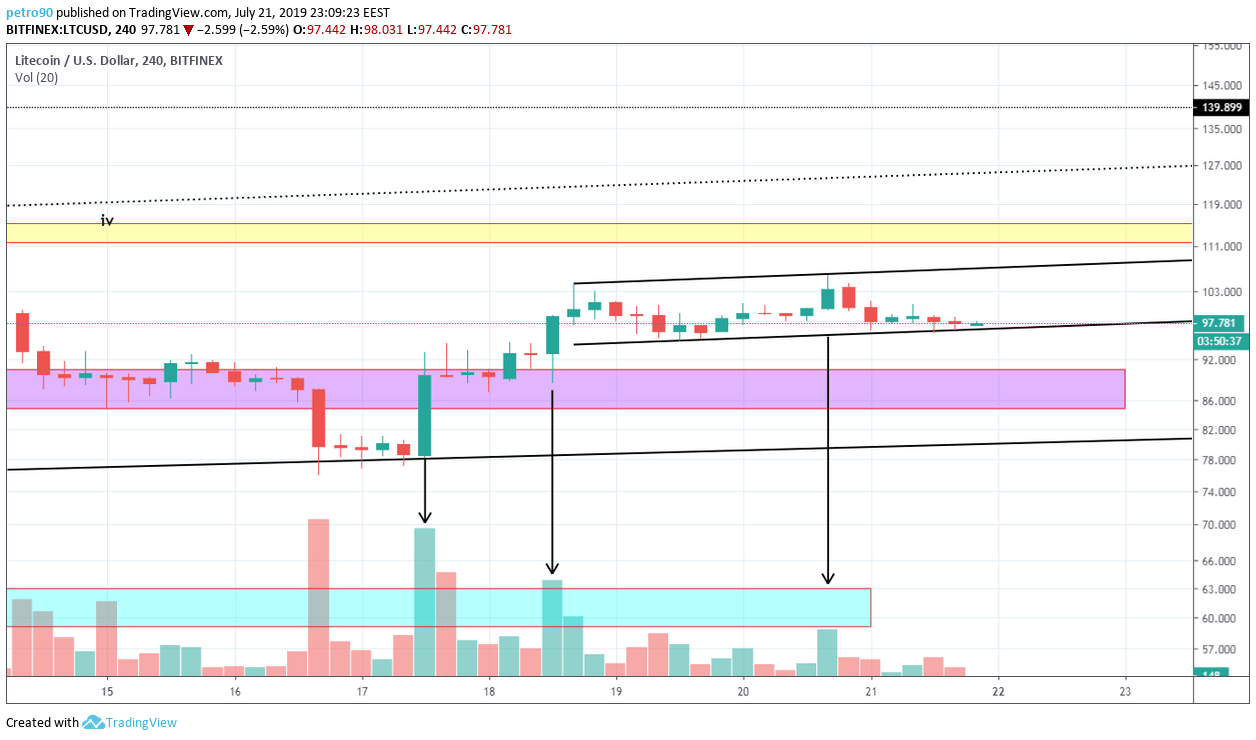 It may mean that before fixing above the price mark of $100, sellers may try test the price zone of $85-90 again, after which buyers will continue their initiative.

Marginal buyer positions are trying to fix below the blue trend line, above which the price is traded from January 2018: 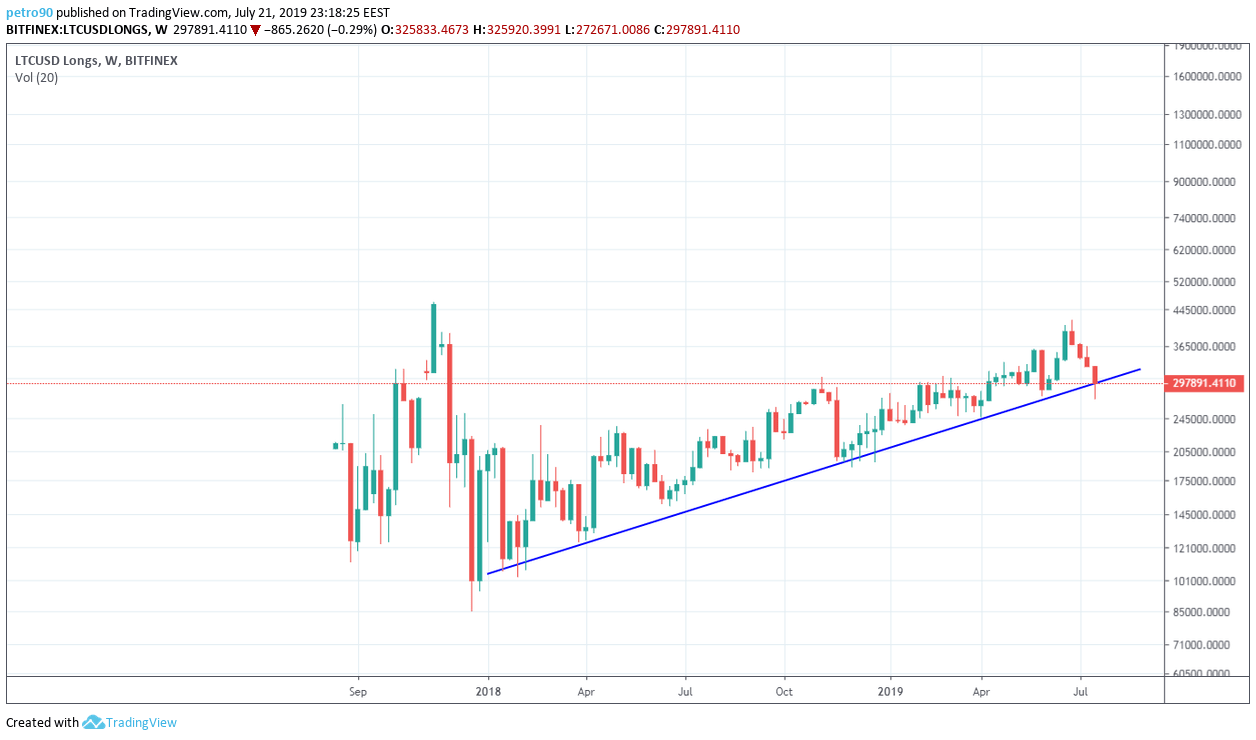 Sellers this week were quite uncertain in their mood and desires. Their marginal positions which are in consolidation, talk about it: 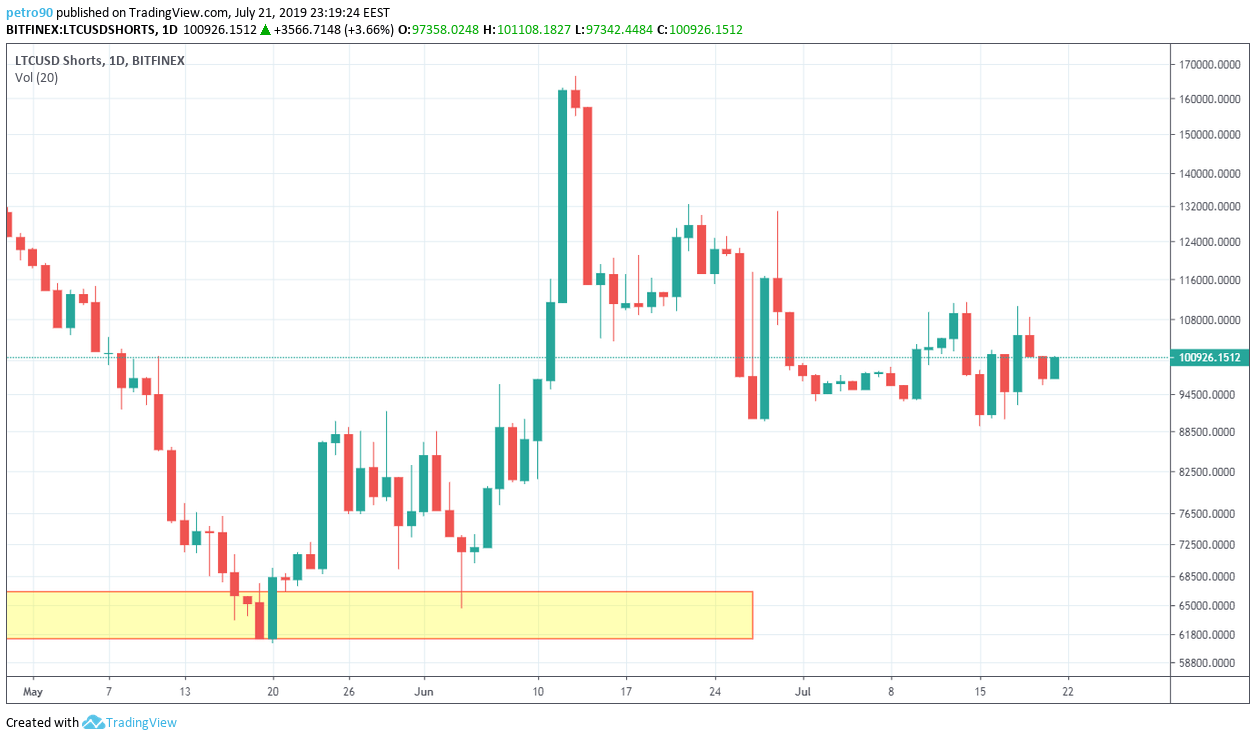 The interesting fact is that on 18 July, when Litecoin rose by almost 15%, breaking the price zone of $85-90, sellers increased their marginal positions. 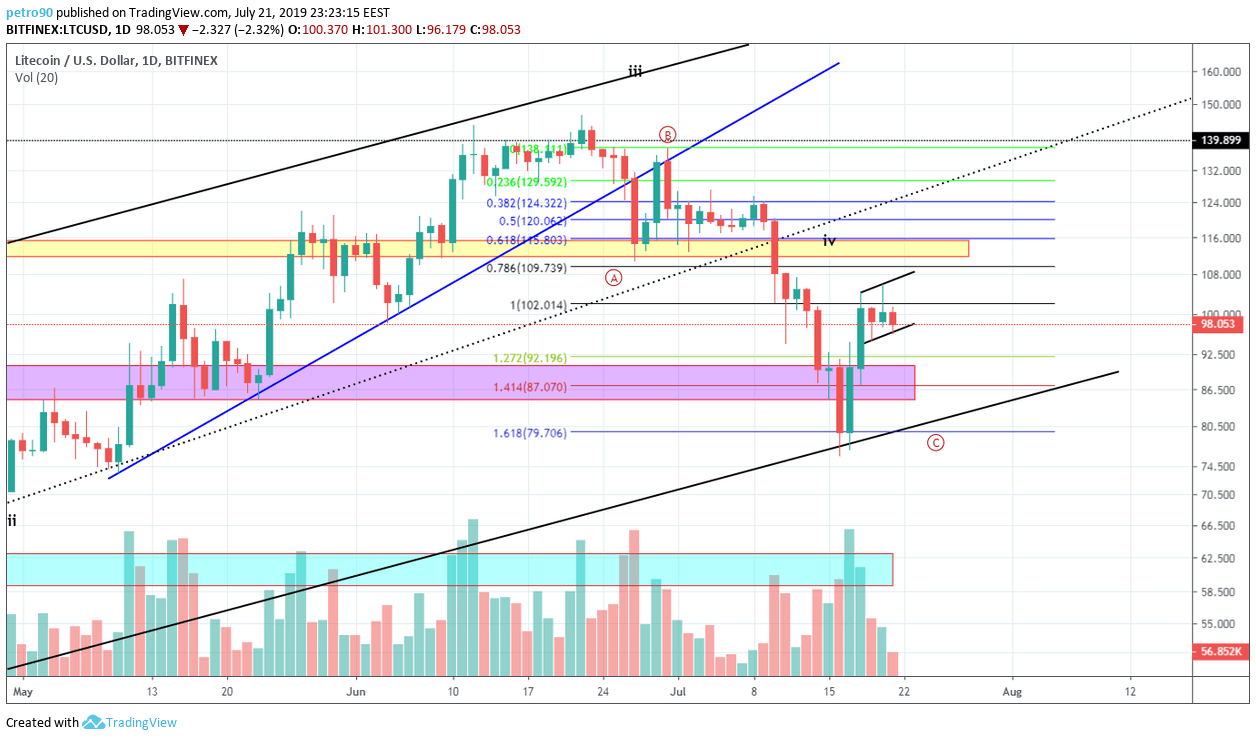 Therefore, so far, the main scenario remains in force and we expect a continuation of growth to $112-115. However, if buyers can not keep above $100, there is a high probability of an alternative scenario, namely breakthrough of the black growth channel and test $63: 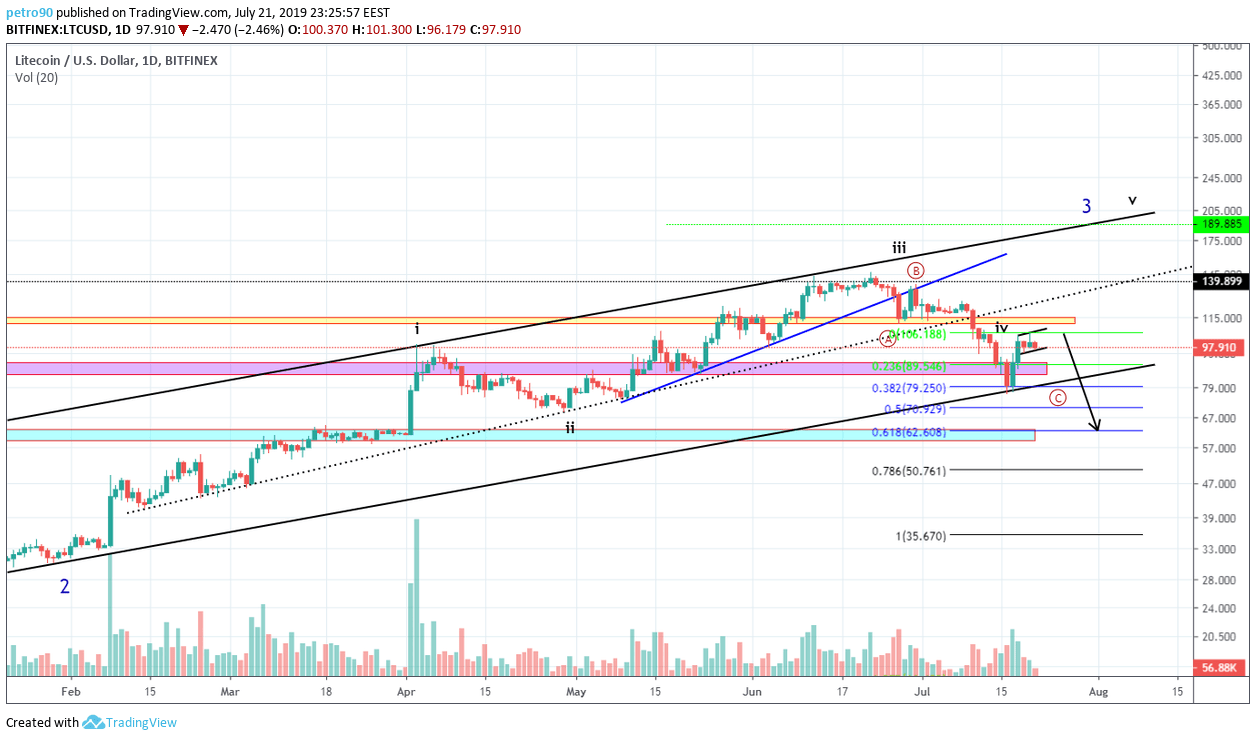 Let’s see what awaits us next week and meet next Monday and summarize!