Given the will, but buyers did not have enough strength. In a nutshell, how did Bitcoin buyers try to fix over USD 10,800 and what was the result of it. Today, 23 July, sellers manage to update the local low by breaking the price mark of USD 10,400. Large volumes, which were fixed on 18 July, did not give buyers sufficient credit of trust and confidence. Sellers took the initiative after testing the main critical points, about which we wrote in the previous analysis.

If you shove a shovel deeper and nicely excavate, you can observe that when sellers tried to break through the lower trend line on 17 July, there was a sharp local turn. At that moment, there was not enough time for buyers to increase their positions at a low price, to redeem all sellers at local lows and after that begin a confidence growth: 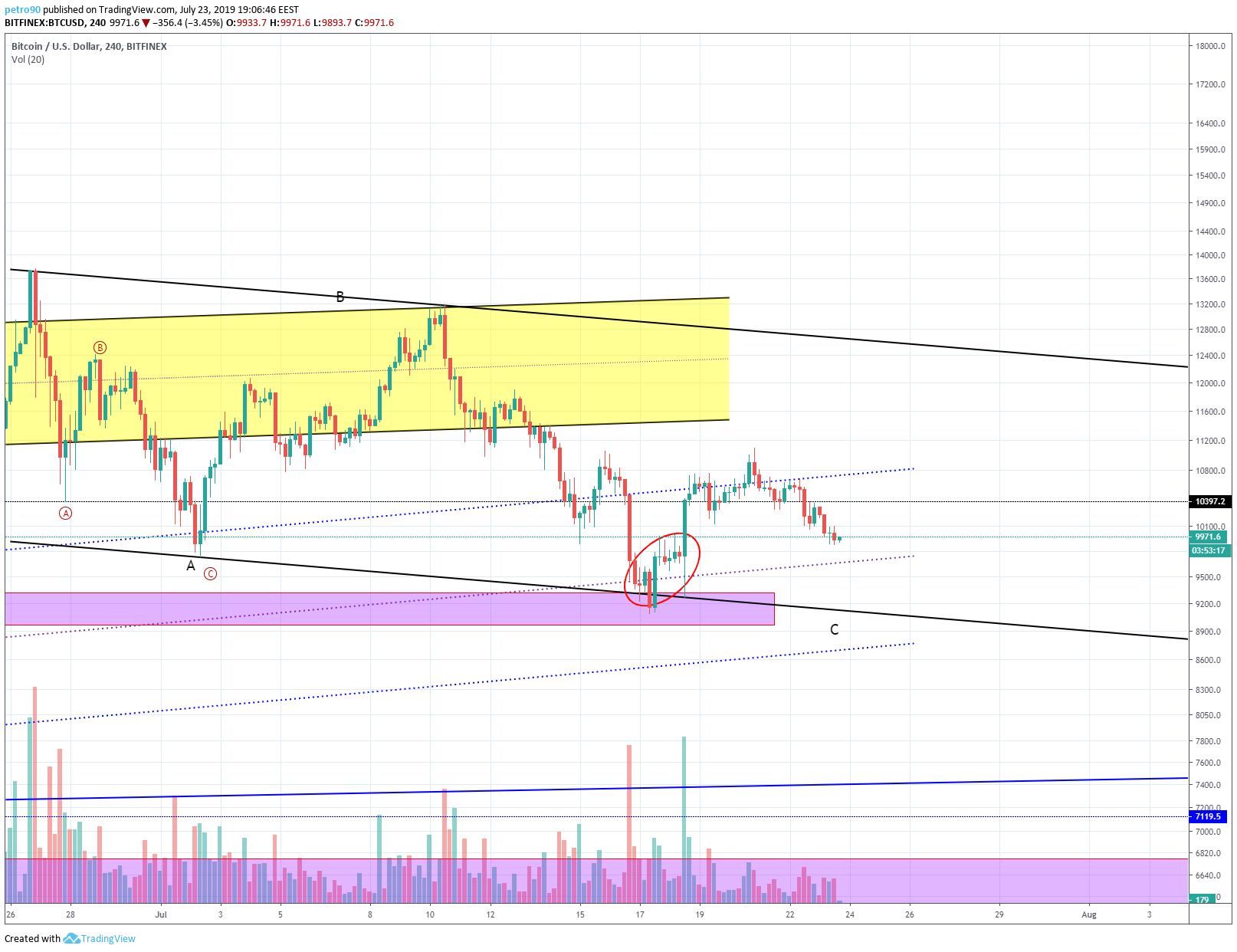 Growth took place on the positive emotions of buyers and now sellers check the actual strength of buyers. At the price of USD 9600, passes the lower limit of local consolidation, after which buyers began flight: 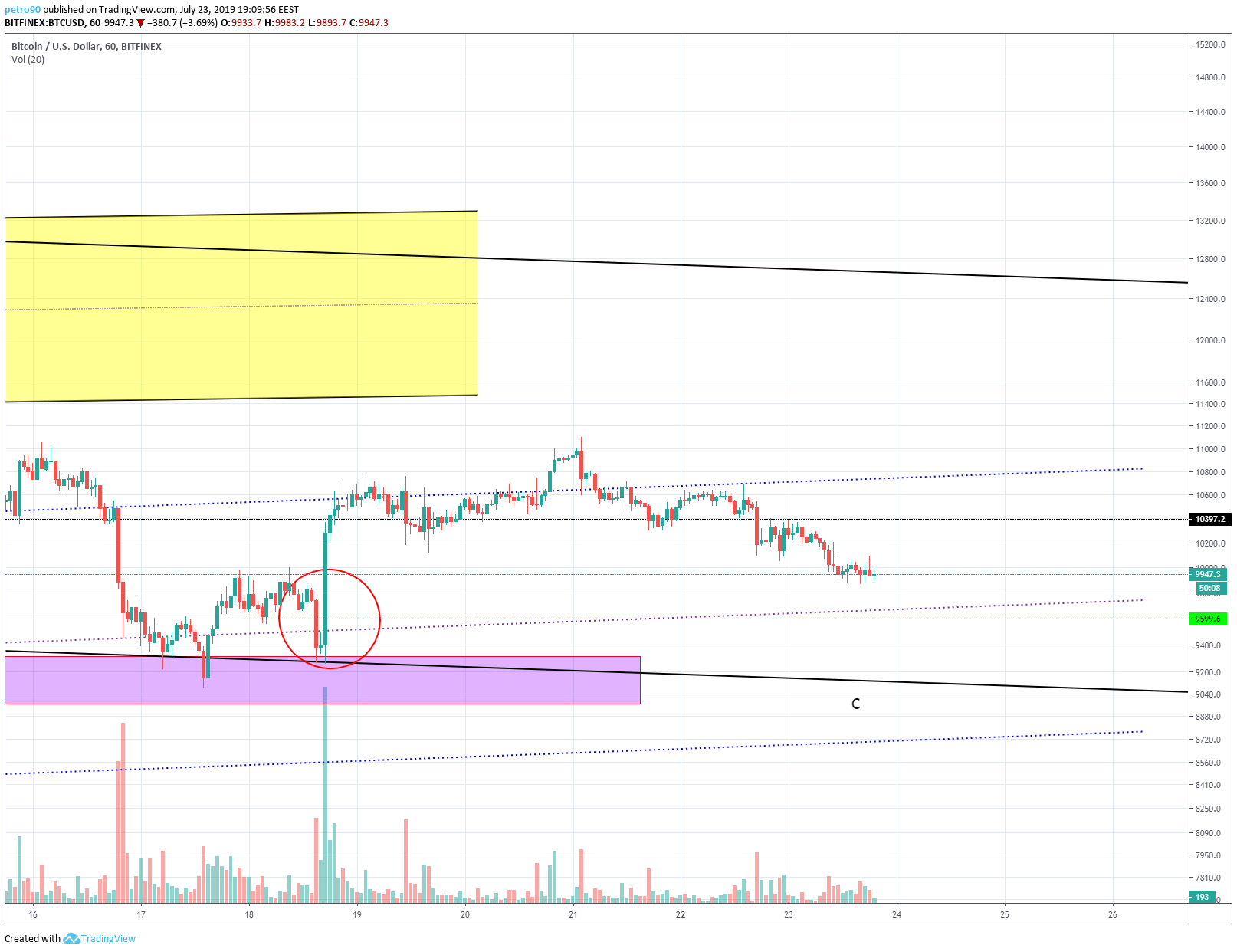 Last time, it was precisely after breaking this price mark, when buyers became more active. Therefore, if buyers do not keep this price mark, sellers will continue to fall to the bottom trend line of the channel, in particular to the price range of USD 9000-9200.

The mood of buyers is not like the mood of soldiers who are ready to go forward, dying for their king: 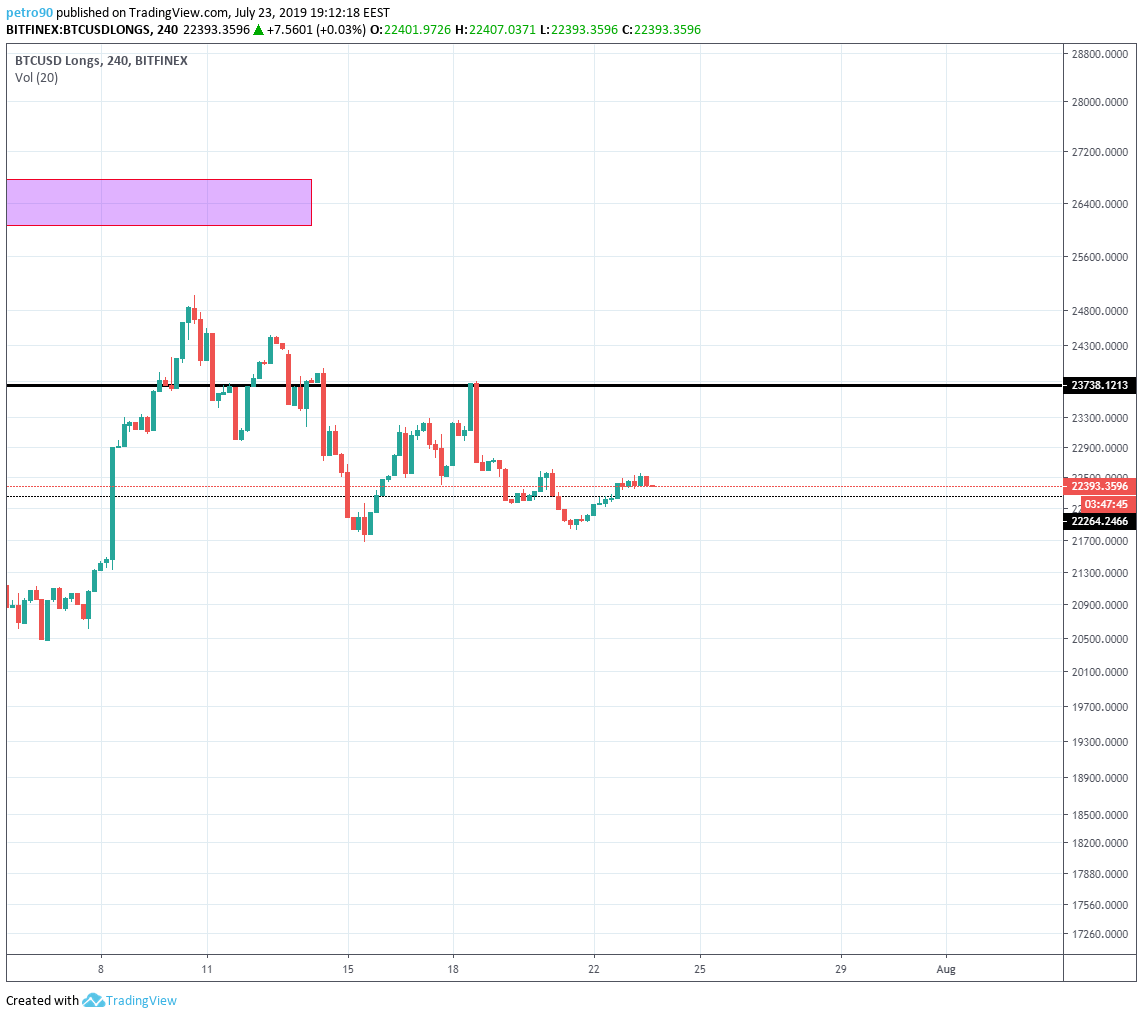 However, during the fall, we do not see a panic in closure of buyers’ marginal positions, which suggests a lack of clear common mood. 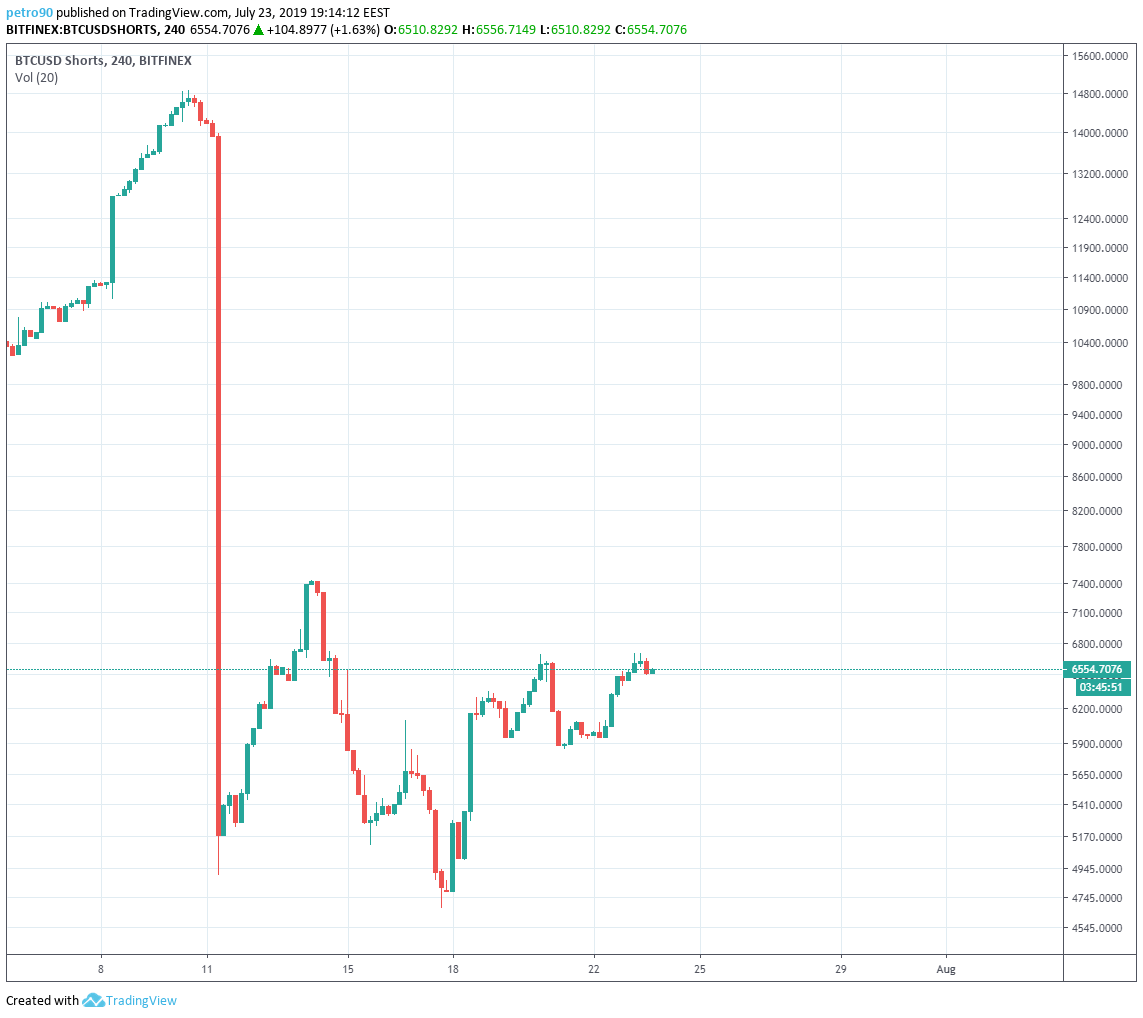 According to the wave analysis, the most probable scenario for us is the continuation of the fall in the limits of wave(C) formation. Which consists of 3 waves, and the last wave has now begun to form: 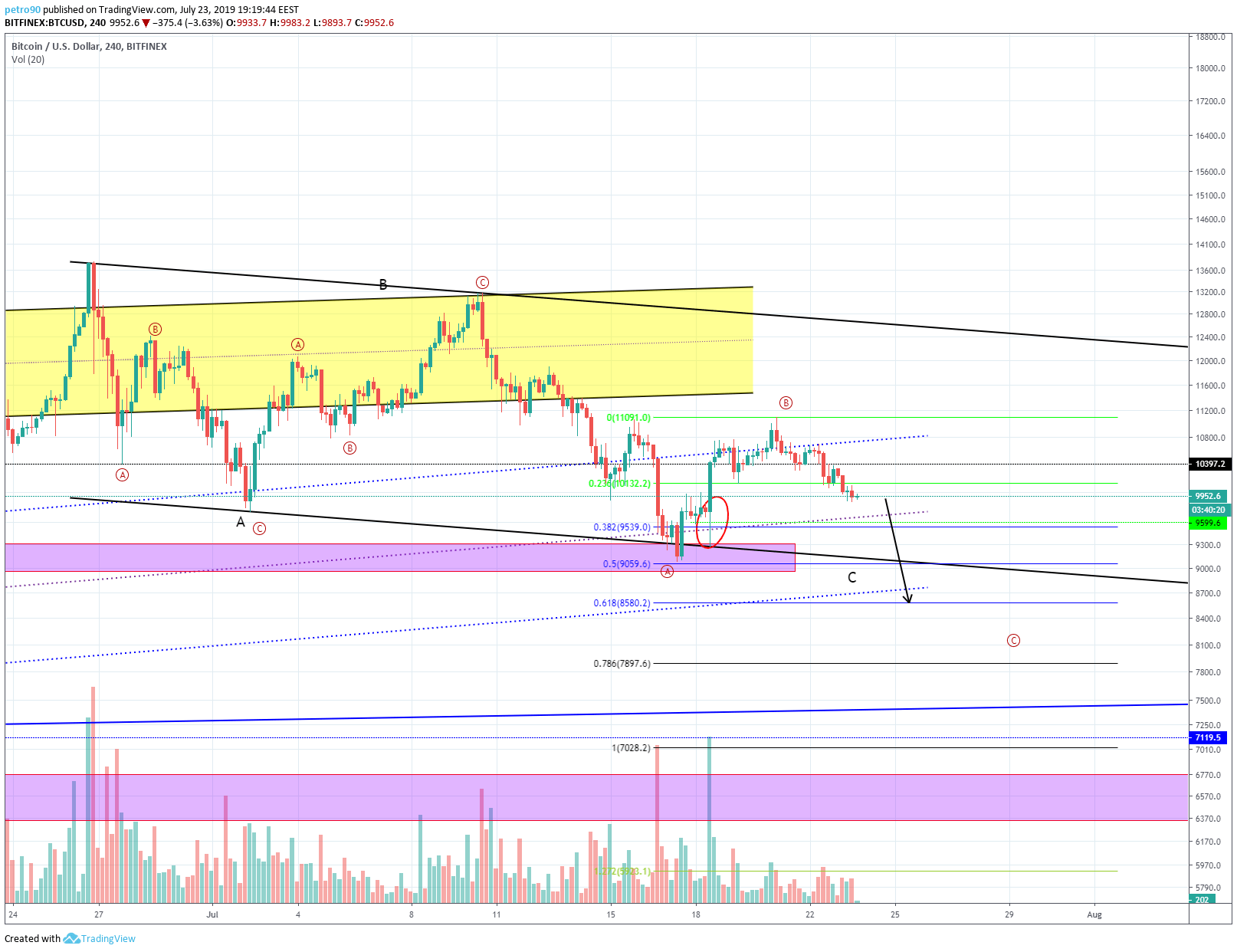 Growth from 18 July  corrected the first wave of the fall by 50%: 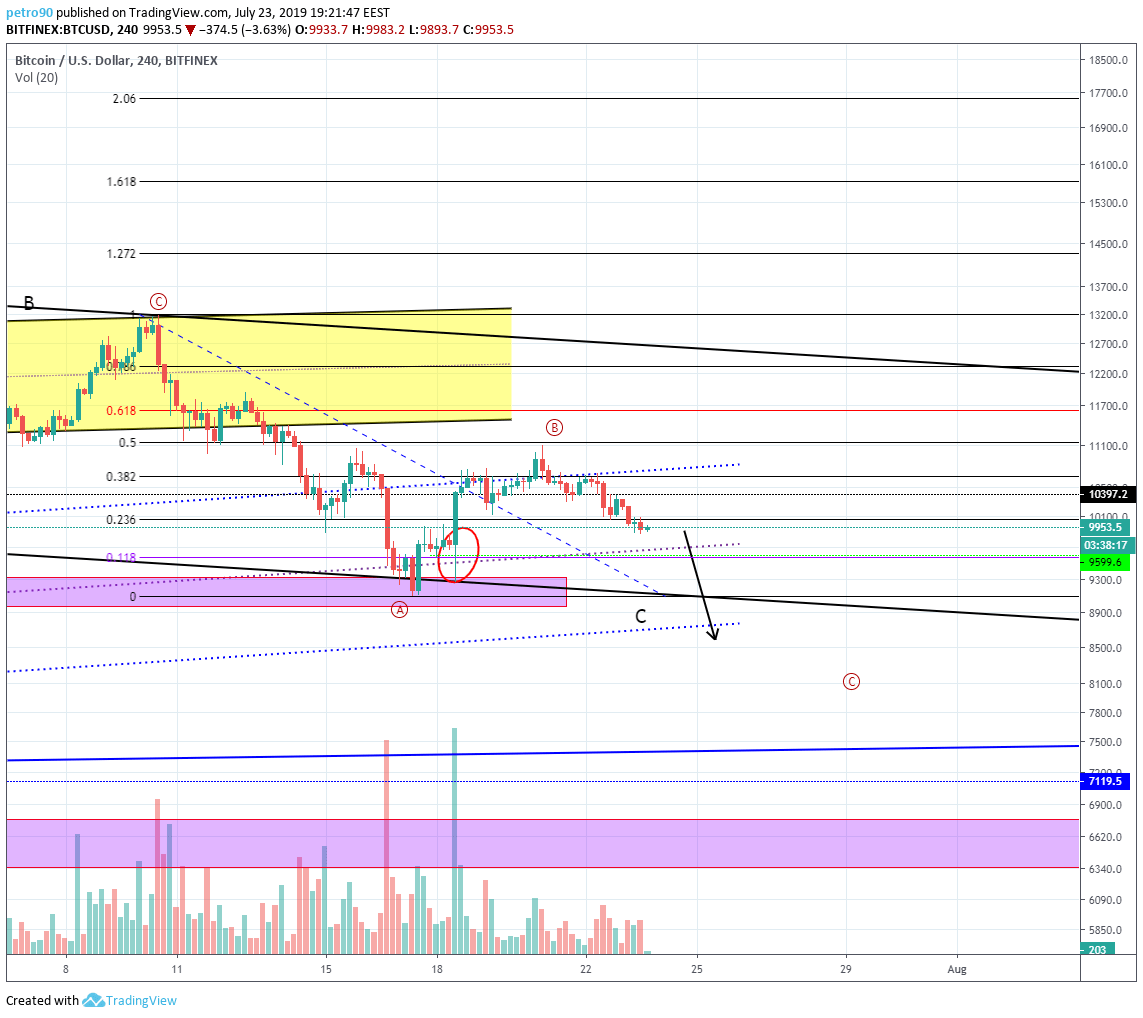 Correction is normal and implies a minimum continuation of the fall to USD 8500. However, at this price, we see a price stop, after which the sellers still have the prospect of fall continuation to USD 7100.

Let’s see if Bitcoin sellers will be able to break USD 9600. Also, on Thursday we will analyze whether there are high probability of the USD 7100 test. Have a good week!

The post Bitcoin Market Analysis: There’s $7100 in the Air. Are Buyers Ready to Keep at least $9600? appeared first on BitcoinNews.com.