The prospective attack of Bitcoin sellers and movement of prices to marks of USD 8500 and USD 7100 is still postponed. Yesterday, 24 July, Bitcoin buyers managed to keep USD 9600 – a critical point, which we wrote about in a previous analysis.

More precisely, sellers have not expressed a desire to fix below USD 9600. Because we did not mention, according to volumes, aggressive fight and great efforts. After a little consolidation in the red zone, buyers were able to break through the local trend line on 25 July, which sellers kept from 20 July: 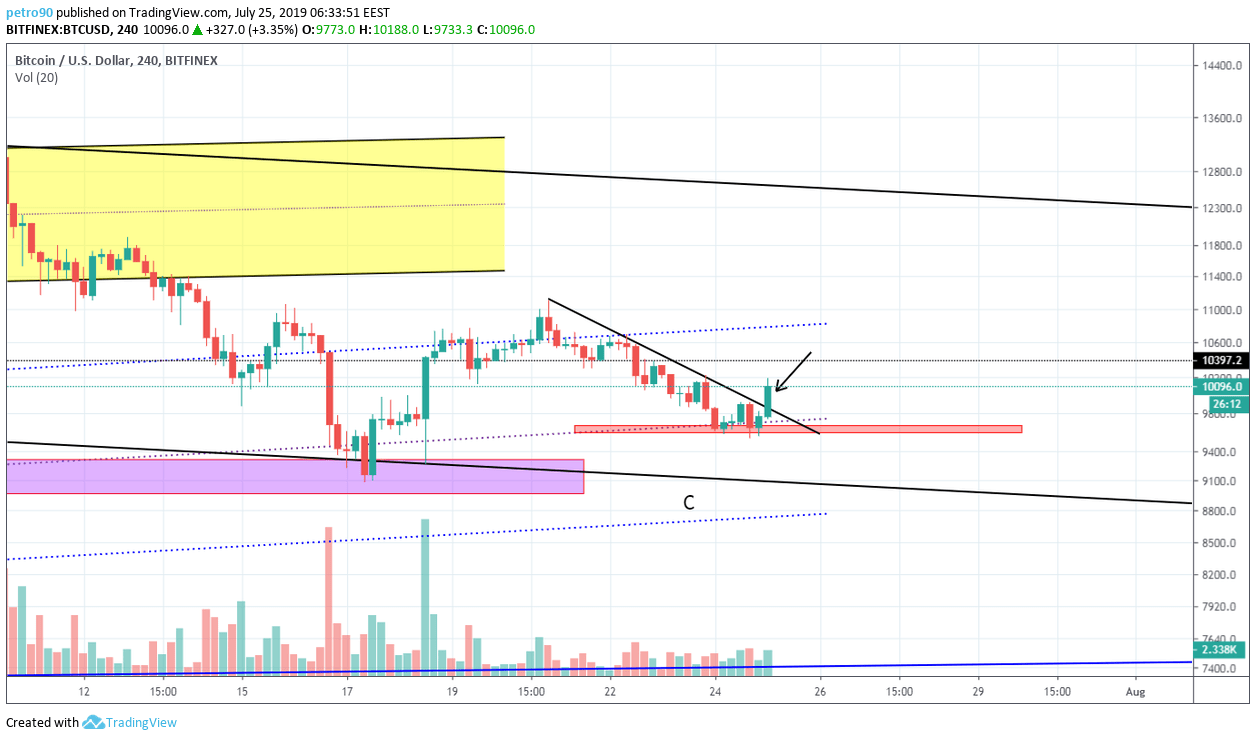 We also want to highlight the likely channel of the price movement, from which sellers managed to exit for one day by a false breakdown and without volumes: 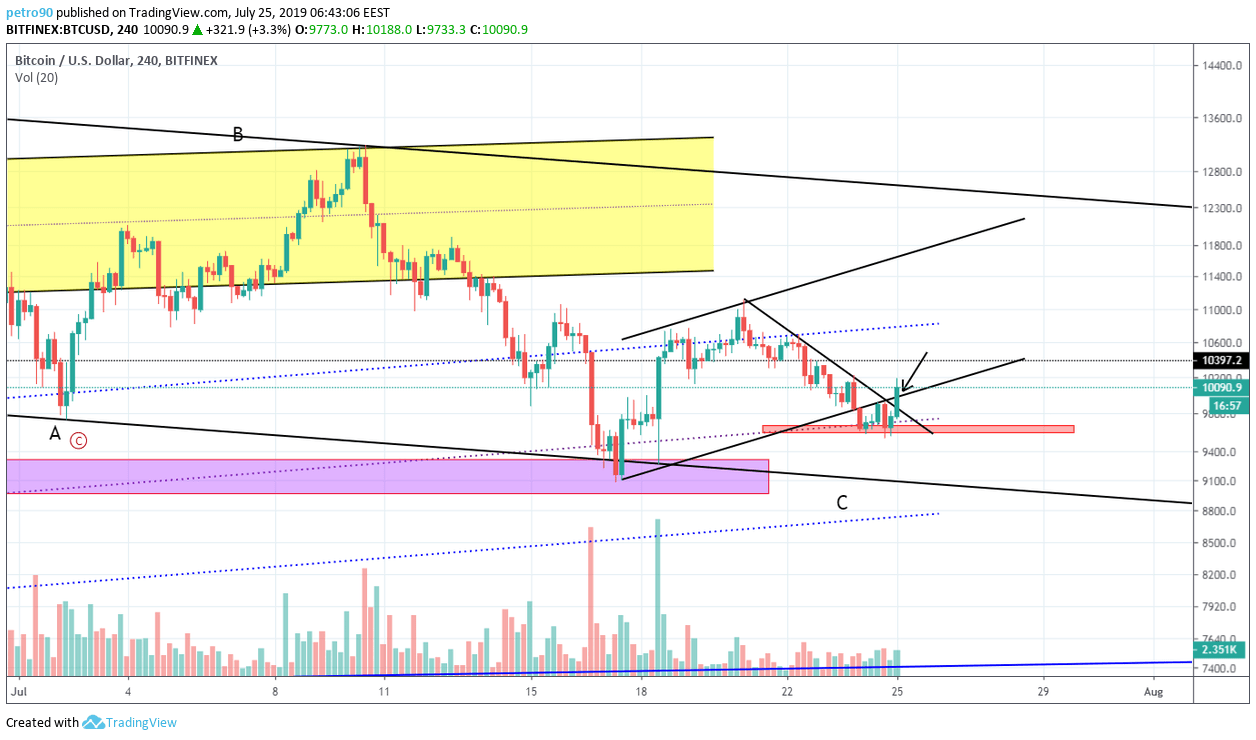 Buyers are trying to bring the price back to the channel. If even buyers cannot break USD 11,000 at once, it is important that during the correction they kept USD 10,400: 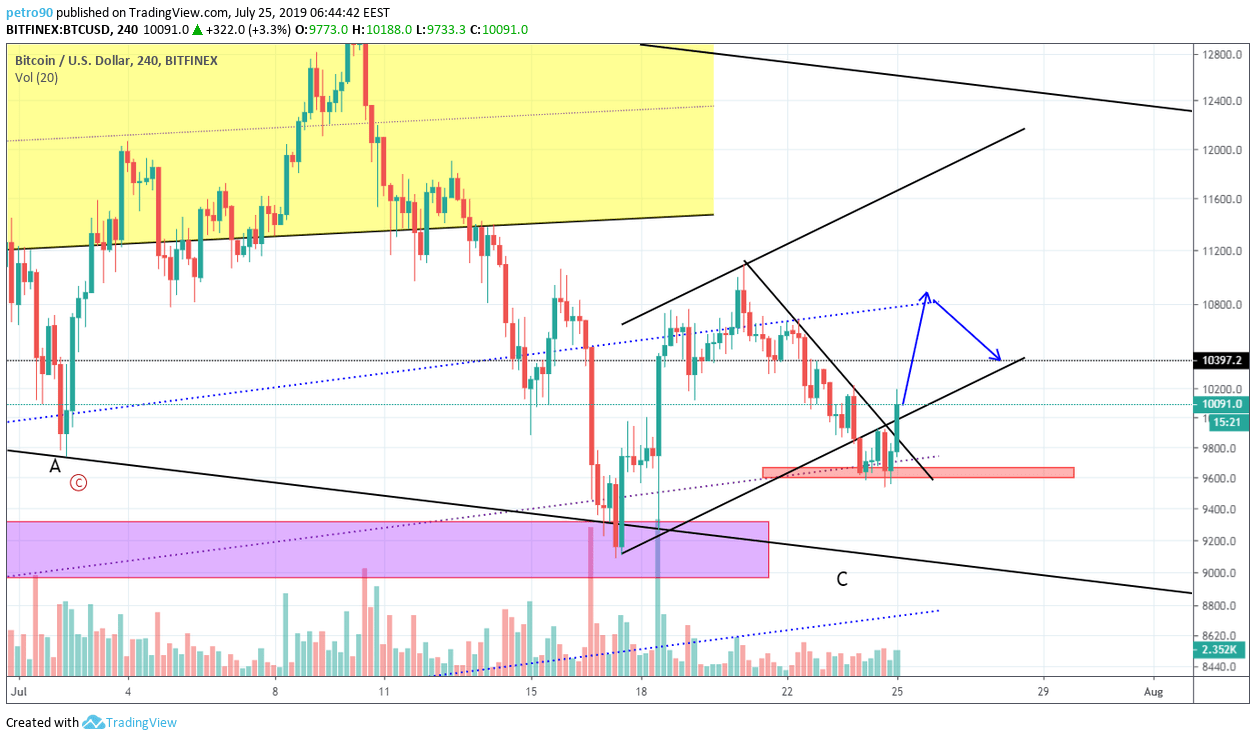 This fact will be a good signal for the continued growth of buyers and movement to the upper limit of the new growth channel. For today it is important for buyers to fix a higher than USD 10,200, to start attack on USD 10,400.

The mood of buyers has changed from the previous analysis. Confident closing of buyers marginal positions and updating the local low speaks of their uncertainty at the moment: 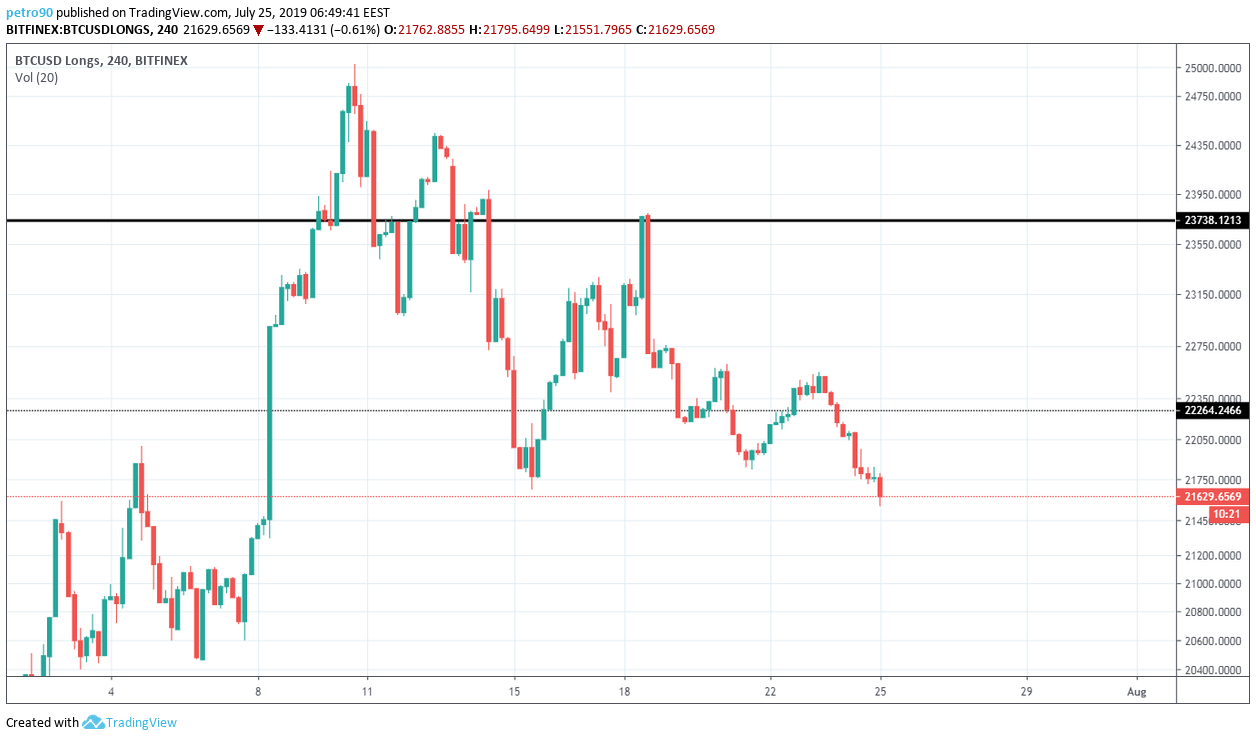 However, we do not see any special confidence in the mood of the sellers, which also confirms trading volumes: 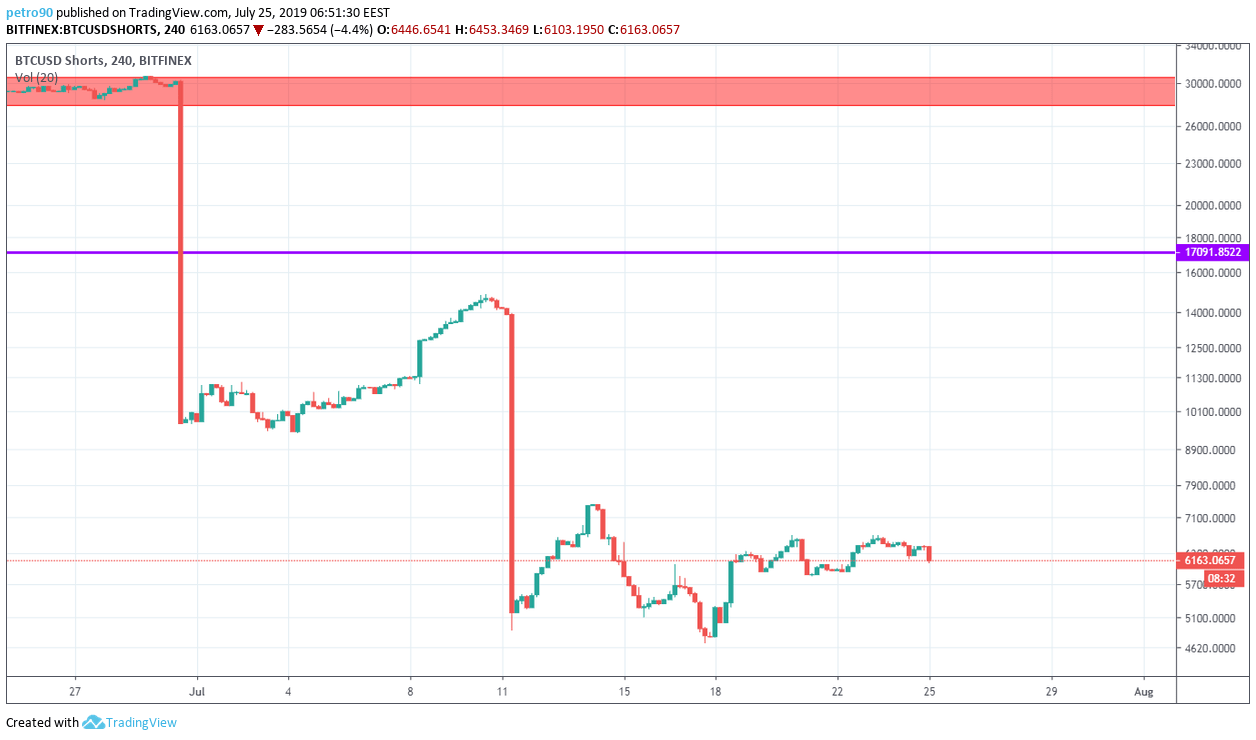 In the wave analysis, we see that the wave of the fall, which began on 20 July, corrected the previous growth by 78.6%: 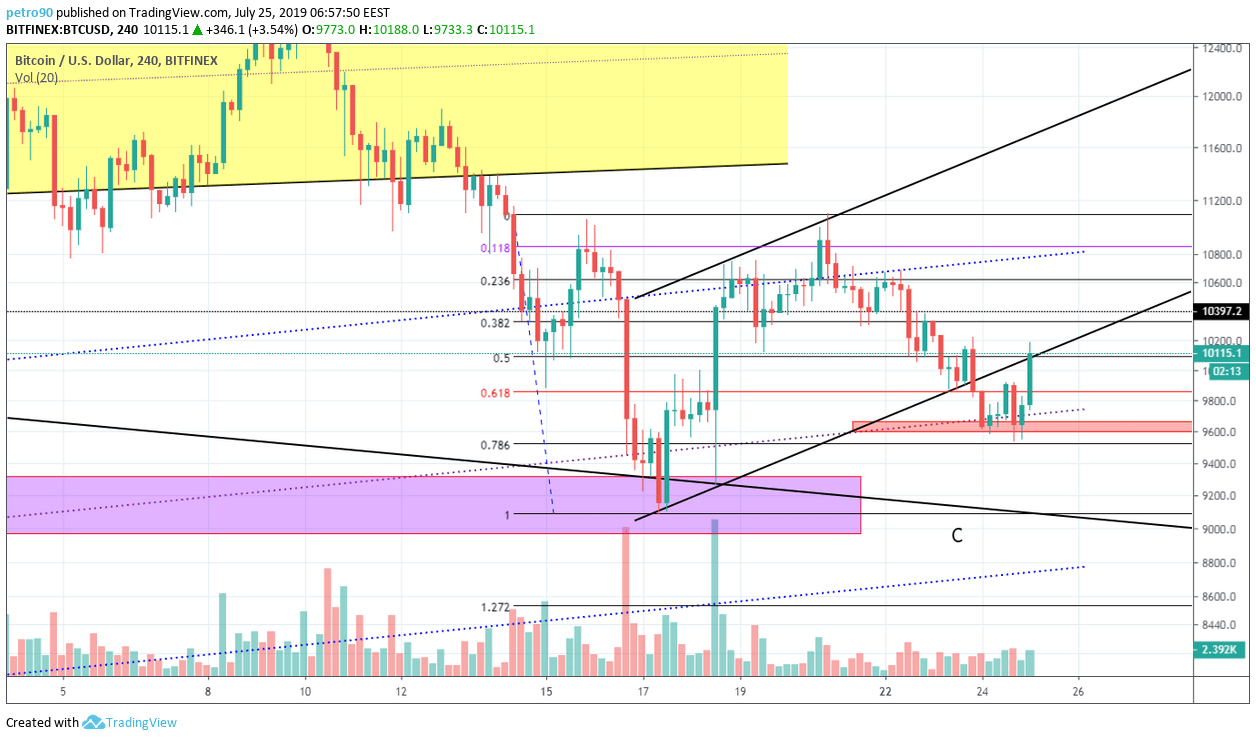 Therefore, if buyers can fix above USD 10,400, our main scenario is the continuation of the formation of the 3-wavelike growth structure, which began on 17 July  and the test of USD 10,800 (Fibonacci level 61.8%): 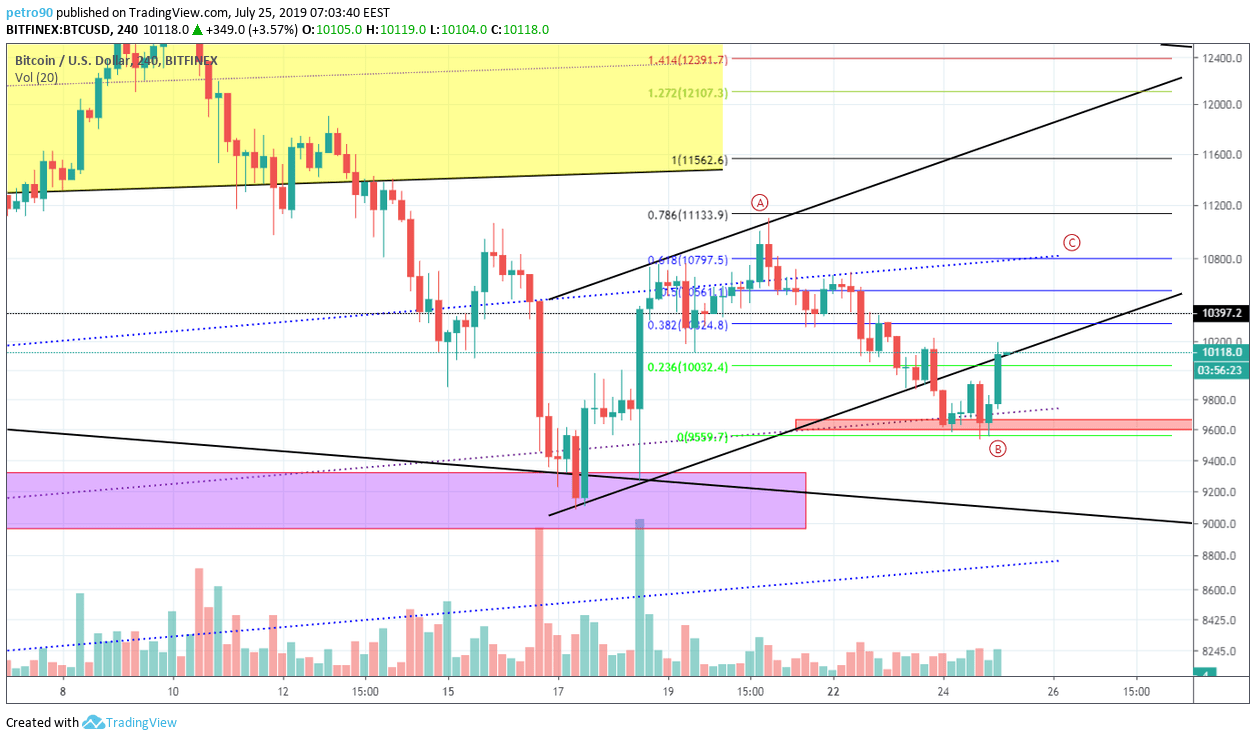 There is also an optimistic scenario, in which growth from 17 July was the first wave of growth, and after correction we are still expecting growth to about USD 15,000 . But this scenario has not yet been confirmed by either the volumes or the mood of buyers.

In tomorrow’s Bitcoin analysis, we’ll see if buyers were able to fix in the new growth channel and whether they could test USD 10,400. See you!

The post BitcoinNews Bitcoin Market Analysis: Buyers Hold on to $9600. Is It Temporary Victory or Trend Change? appeared first on BitcoinNews.com.