Positive for Bitcoin buyers, as we wrote about in the previous analysis is gradually transformed into realism. Buyers were not able to return the price to the channel in which it traded from 17 July. Light false breakdown of the bottom line of this channel and a little consolidation. It is all that buyers were able to respond to the local fall from 20 July.

Now, in order to re-try growth, buyers need again to keep the USD 9600. Thus, we have a consolidation, the bottom line of which sellers are now trying to break through. Remind you, that this consolidation is formed outside the growth channel from 17 July. And as we have already written in the article about ETH  this fact is obviously in favor of sellers.

What was the growth from 17 July? Given that buyers were not able to return the price to the channel and low volumes, this growth was a correction of the wave of fall from 10 July. And the first confirmation of it should become a breakthrough by sellers of the price mark USD 9600.

On the hourly timeframe also visible the signs of consolidation – a sharp change of price movement and maximum volumes at the upper and lower limits: 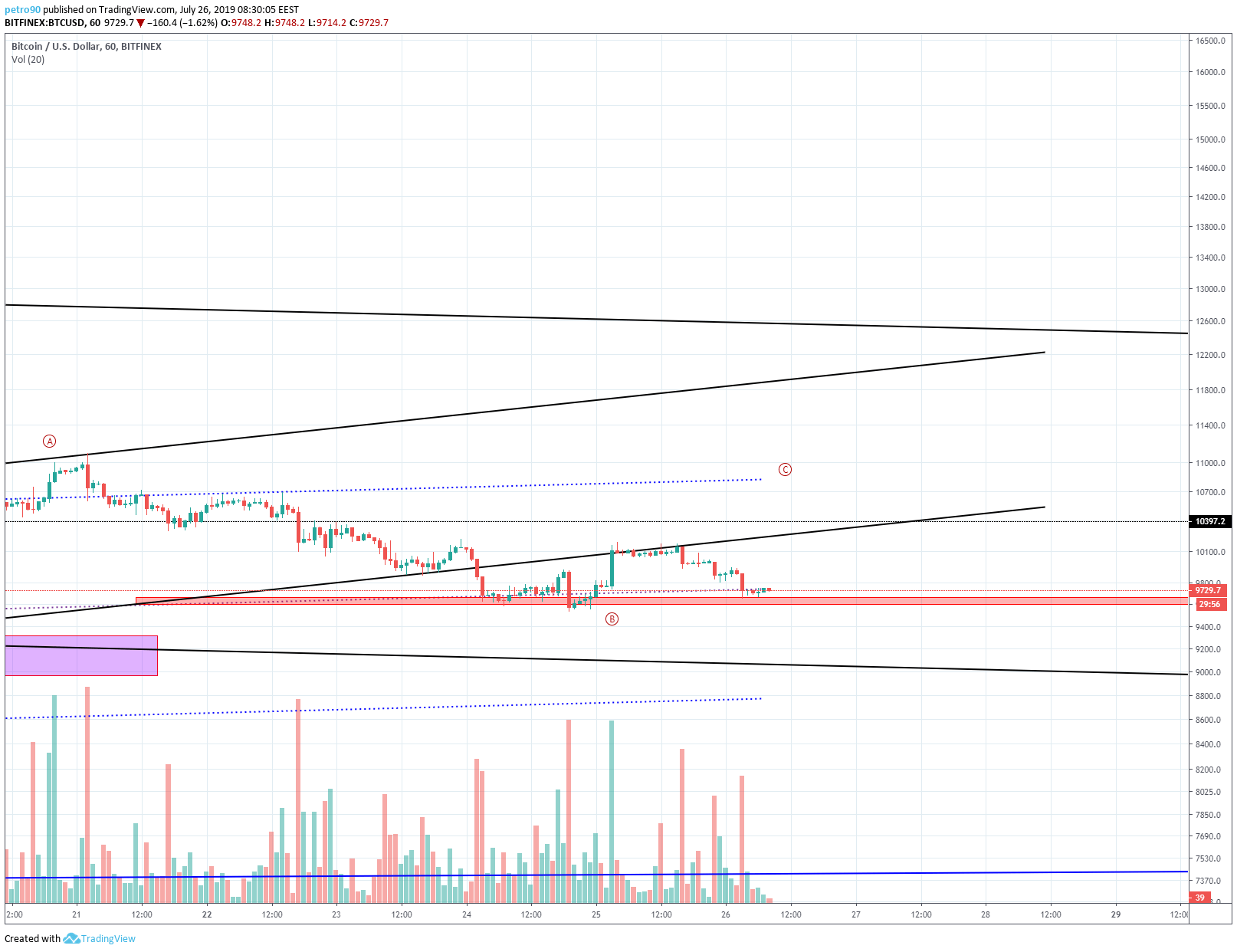 Day timeframe also points to a likely continuation of the consolidation, as two past day candles closed with pins on the opposite side. The parties are not ready to yield their positions, and it needs time to allocate who is stronger in the given range. 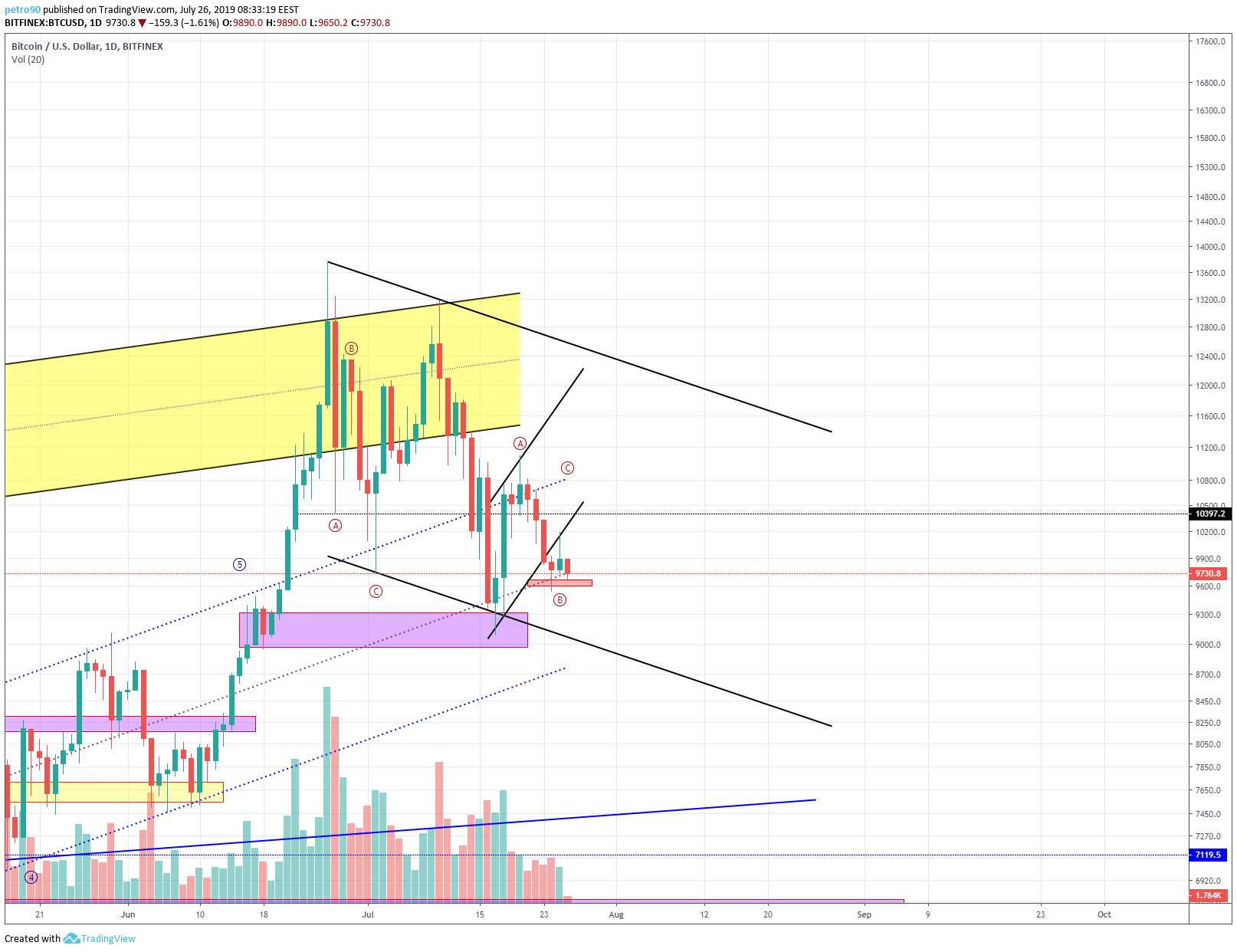 We did not find any special changes in the mood of Bitcoin buyers. They continue to close their marginal positions: 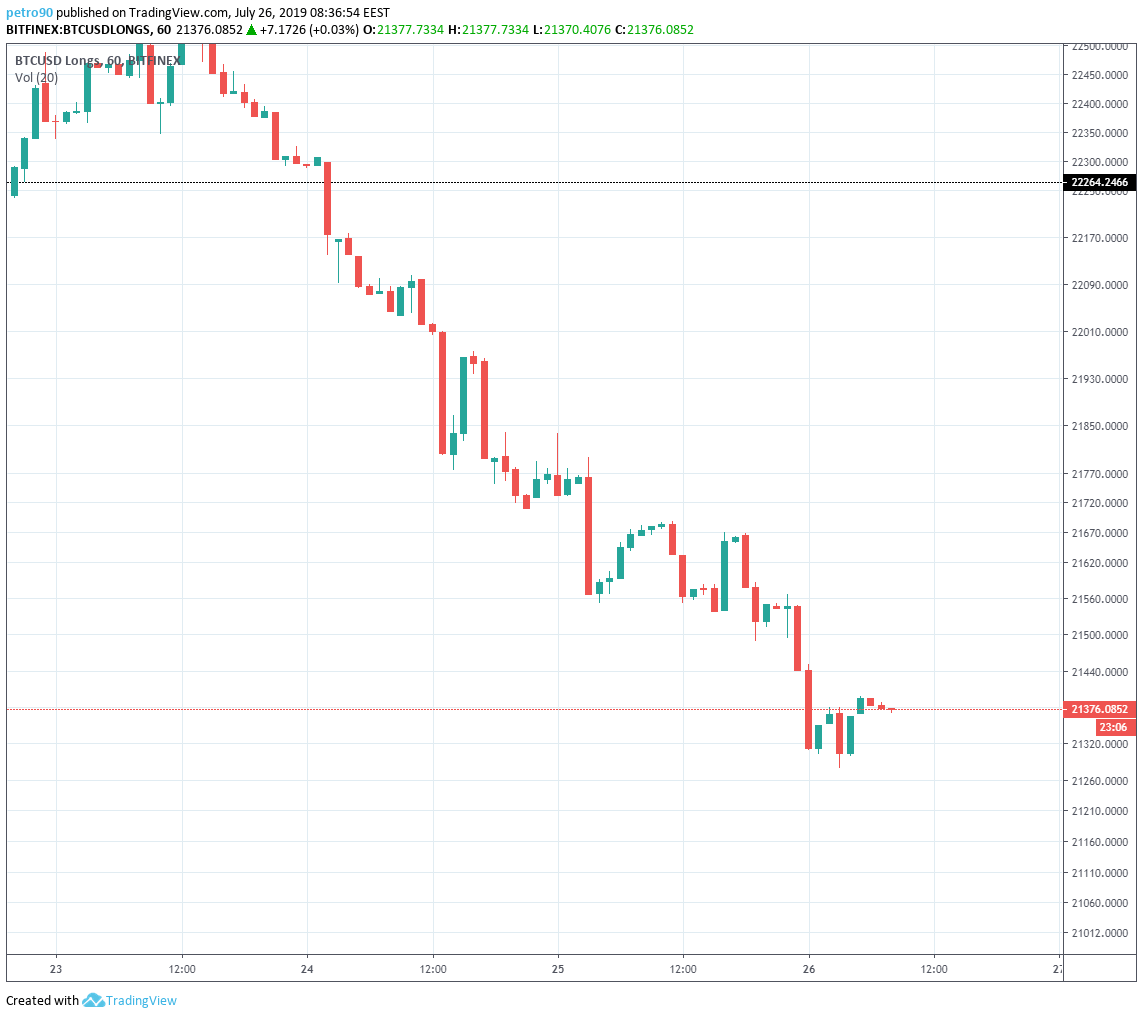 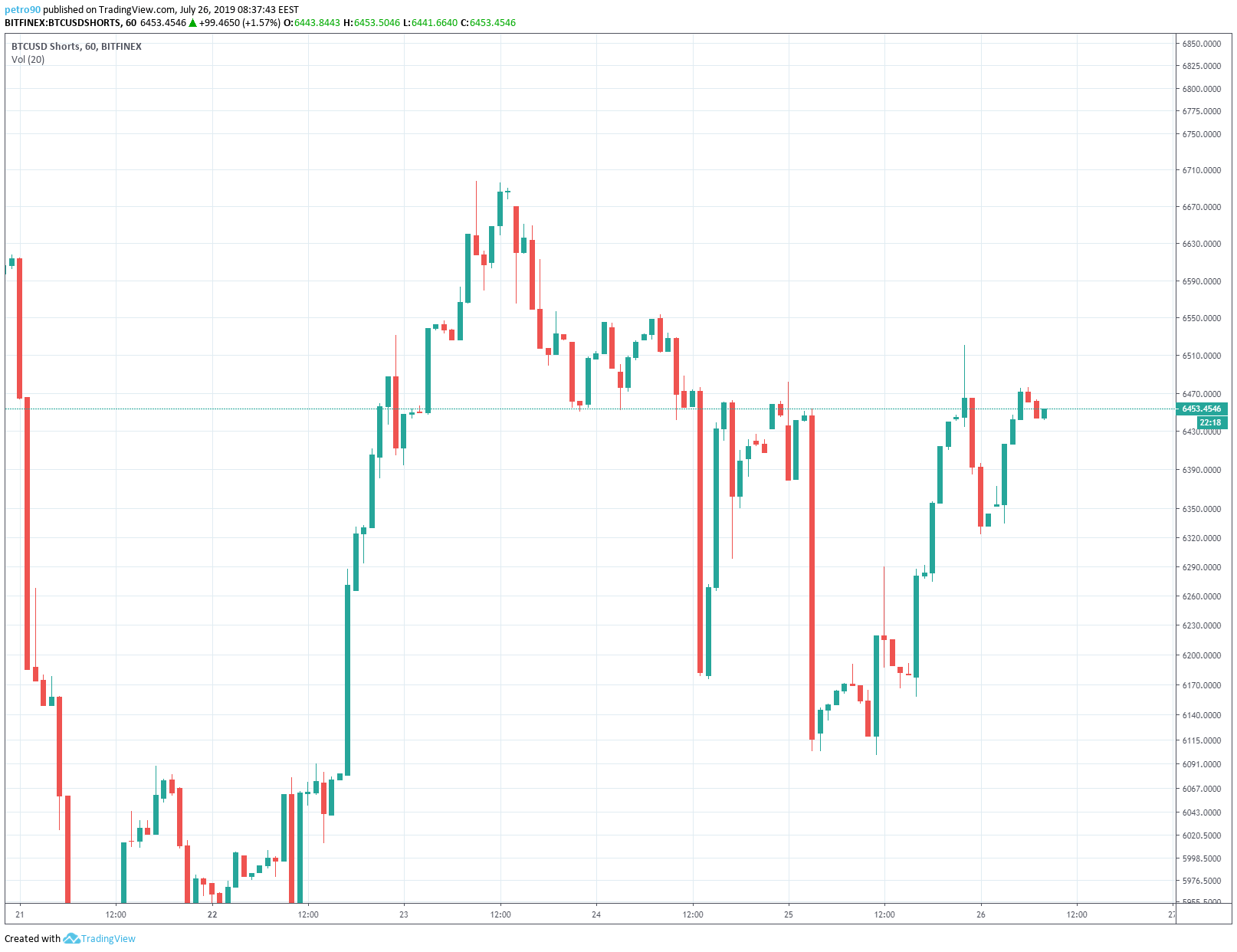 In the wave analysis, while the price is below USD 10100 and the bottom trend line of the broken channel, we take as a basis the continuation of the fall with the first serious target of USD 9200: 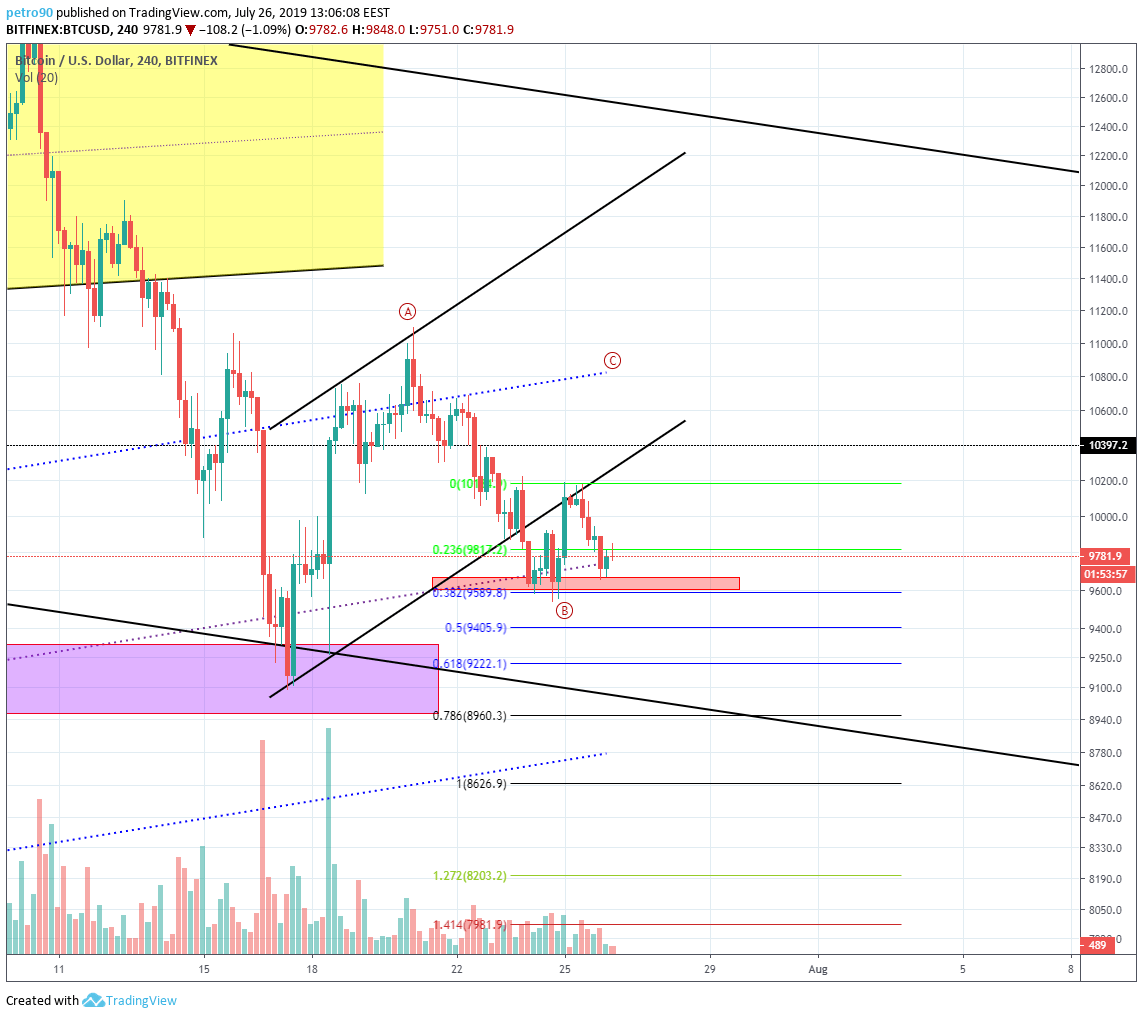 Otherwise, if buyers fix themselves over USD 10100, it will mean the continuation of the correction of the previous wave of fall, in the form of a wave (C) with the first serious target of USD 10800: 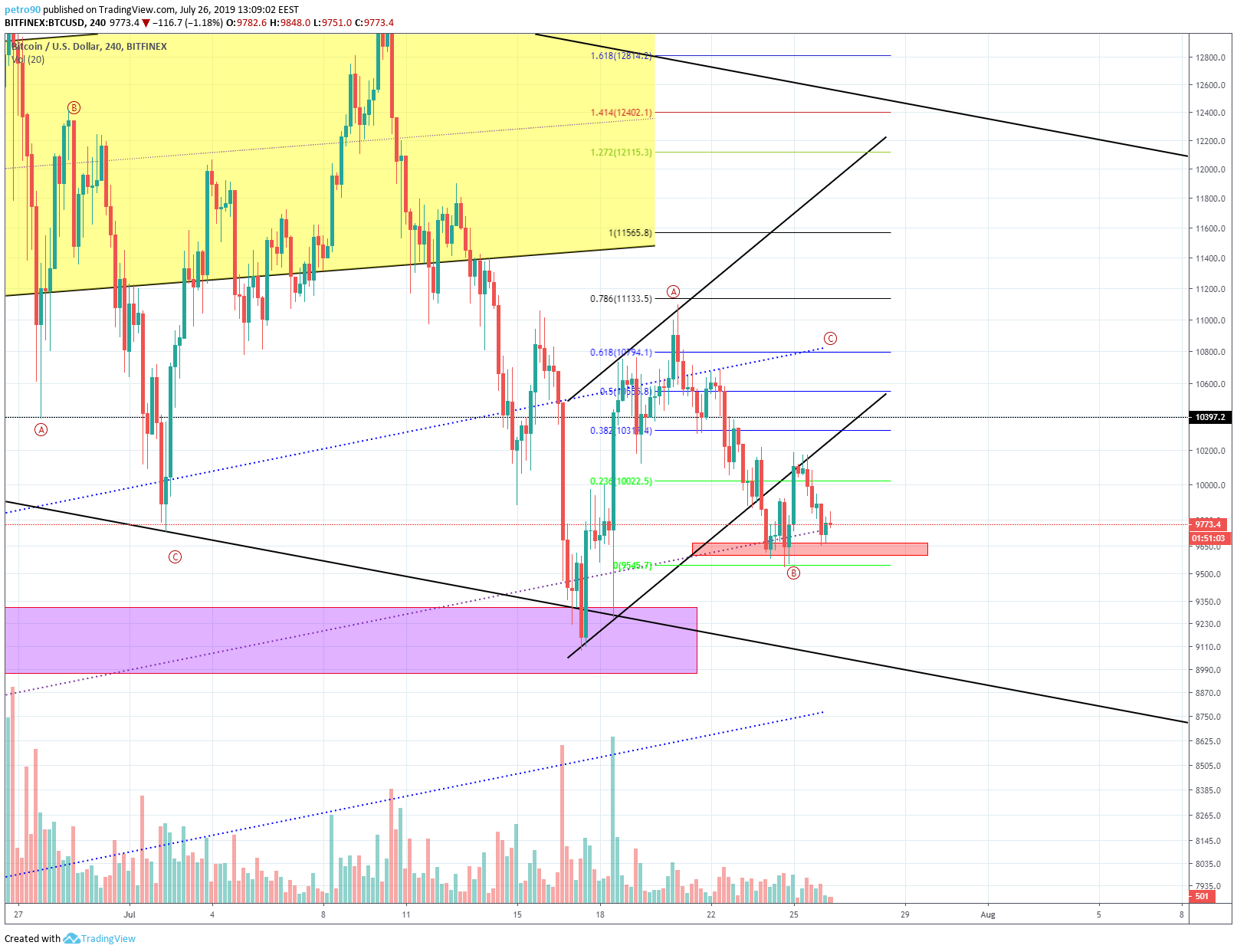 Let’s see tomorrow whether one of the sides will move the situation to some side, or we will have to observe some time behind a boring consolidation.

The post Bitcoin Market Analysis: $9600 is Again in Danger appeared first on BitcoinNews.com.