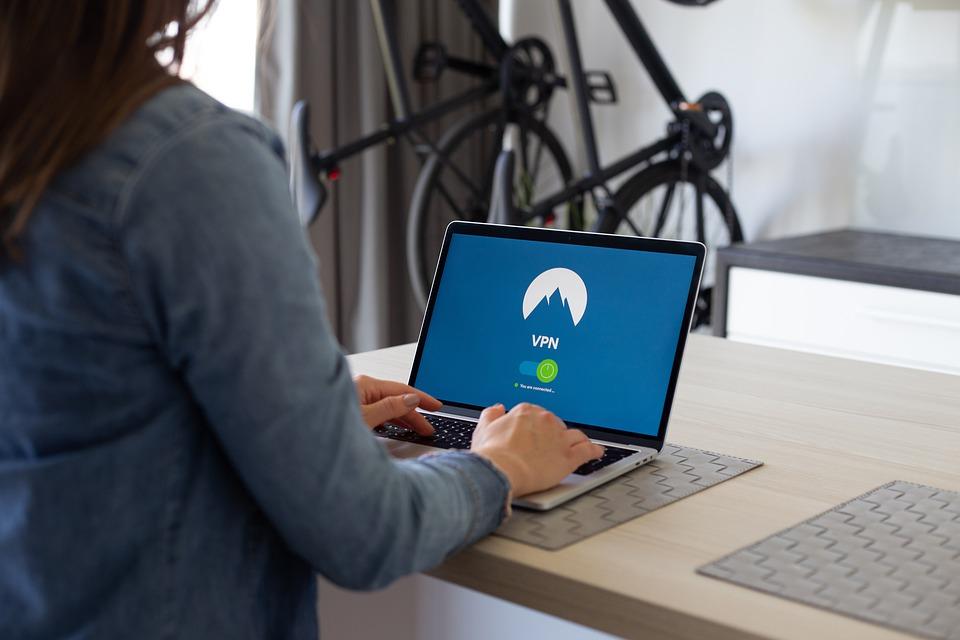 Internet censorship has become a severe problem in China, where a Great Firewall has been built which spies on and censors the internet usage of 340 million Chinese citizens, as explained in a previous BitcoinNews.com article. Commonly used websites like Google, Facebook, Twitter, Wikipedia, and the New York Times are banned in China. Beyond limiting the free flow of information, China also arrests people who post dissenting thoughts against the government, while simultaneously not allowing people to use the internet unless their identity is verified.

How a VPN Works

One of the most common tools used to circumvent internet censorship is a Virtual Private Network (VPN). When using the internet without a VPN, the origin and destination of data are known, and it is possible to see the data travel from point A to point B. The Mozilla Developers describe the internet with this analogy “Let’s imagine that the web is a road. On one end of the road is the client, which is like your house. On the other end of the road is the server, which is a shop you want to buy something from… When you type a web address into your browser (for our analogy that’s like walking to the shop).”

A VPN encrypts data at the origin, making it so no one can read the data. Additionally, the VPN hides the origin internet protocol (IP) address, so that no one can know where the data came from. The encrypted data is sent to the VPN server, which decrypts the data and sends it across the public internet to the destination. Outside observers would think the data came from the IP address of the VPN server, and would not be able to know the real origin IP address. 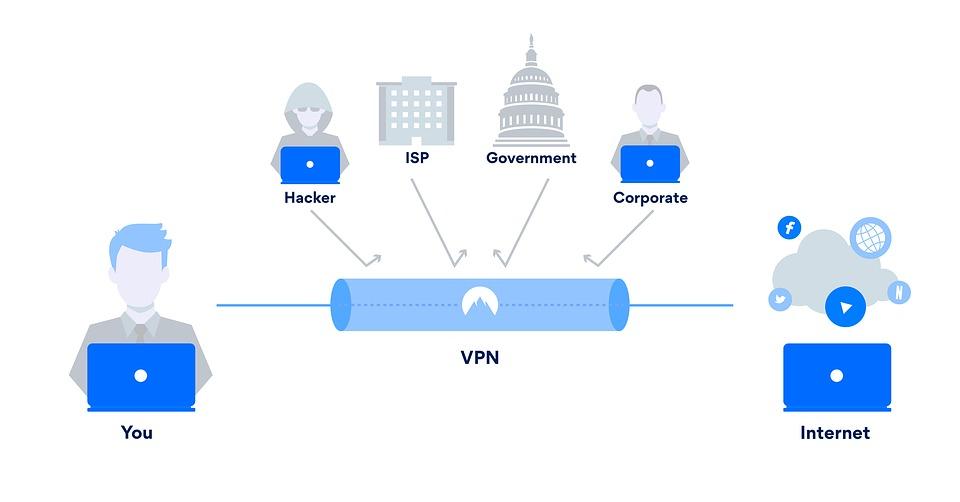 Schematic of a VPN, showing how the VPN secures users against entities and organizations that spy on internet traffic. Courtesy of Pixabay.com

Expanding the Mozilla Developer’s analogy, a VPN is basically like hiring a masked person to go to and from the store for you, and that person travels to another country in between to throw off anyone following them.

VPNs Are Fundamentally Flawed Due to Centralization

Although in an ideal world, VPNs would offer rock-solid anonymity, there are several caveats in real-life which can compromise the anonymity of VPNs. These problems generally stem from the centralized nature of VPNs, meaning a centralized entity like a corporation or an individual is in charge of each specific VPN service.

Logging of connection and usage data is an unavoidable problem for some VPNs, especially when using a free service. If a VPN indicates that it has bandwidth limits, then it is likely logging usage data, and this usage data could end up exposing a user’s identity as well as what they are doing on the internet.

Paying for a premium VPN service is another point where anonymity can be compromised if a credit/debit card or any other fiat payment method is used to buy a VPN, then the VPN account can be linked to an identity. Fortunately, cryptocurrency solves this problem. Paying with Bitcoin is usually enough to hide one’s identity when paying for a VPN, and even better is paying with the stealth cryptocurrency Monero.

VPN services usually also come with a terms of service (ToS) document, which may include a privacy policy. It is critical to read this privacy policy to ensure that the VPN will not divulge information for any corporate or law enforcement reasons, or even store data in the first place.

Due to the centralized nature of a VPN, an administrator can install malware such as trojans, adware, riskware, and spyware, which can be used to collect personal data including text messages, calls, and even banking information. This obviously completely defeats the purpose of using a VPN in the first place.

Collection of personal data, which is then sold to 3rd parties or used to display customized ads, is apparently a common practice for VPN services in desperate need of income. Once again, this defeats the purpose of using a VPN.

Apparently, VPNs sometimes leak, instantly revealing a user’s true IP address and internet usage. It is important to use a VPN kill switch, which instantly cuts off the internet if a VPN connection fails. VPN connections can fail due to slow servers, poor local connectivity, and local firewalls. This is also related to centralization, since the fewer servers a VPN uses, the more likely it is that a leak will occur.

One of the most catastrophic problems that can occur with a VPN is if the network chooses your computer to be an exit node. This can happen with free VPN services that try to build a network with user’s computers rather than having their own dedicated servers. If your computer becomes an exit node, then activity from other VPN users on the network will be traced back to your IP address.

Considering the problems that arise from using centralized VPN services, it is no surprise that decentralized VPN (dVPN) services are being developed. The theoretical goal of a dVPN is that the network is so decentralized, while simultaneously being completely secure, that no one can compromise a user’s anonymity in any way. There would be no administrators on the network that have the power to log, upload malware, spy, etc.

A real-life example of a company that is trying to build a dVPN is Privatix. The idea behind Privatix is that 3.5 billion people have internet in the world, and 90% of the bandwidth is already paid for but goes unused. People can sell their spare bandwidth in exchange for Privatix Tokens (PRIX), instead of just letting their bandwidth go to waste. On the flip side of the coin, VPN users pay a low fee via cryptocurrency directly to the people they are obtaining bandwidth from.

Privatix utilizes the Ethereum blockchain and the Privatix Token is a simple ERC-20 token. A direct peer to peer marketplace for bandwidth is integrated into the Privatix platform, allowing bandwidth providers to post offers, as well as facilitating completely anonymous communication between buyers and sellers. This is perhaps the beginning of a VPN-Based virtual economy powered by blockchain technology.

Although Privatix and Mysterium Are Branded as dVPNs, They Are Centralized and Have Severe Exit Node Issues

The reality is that Privatix is a centralized VPN at this point, albeit a popular centralized VPN with 1.5 million users. Although there is a peer to peer marketplace which utilizes blockchain technology, the actual VPN service is still administered by Privatix.

That being said, Privatix outlines their plan for becoming a true dVPN in the future. Instead of using dedicated servers, which is a centralized point of failure, Privatix plans on having millions of users act as exit nodes. Apparently, users will rapidly switch between exit nodes, which will obfuscate the user’s identity even further. Also, users can choose to be a ‘peer’ in the network, meaning they act as an exit node, and they can then earn dVPN bandwidth instead of paying for it.

A glaring problem with the current centralized version of Privatix, which will probably remain a problem even when the dVPN launches, is that exit nodes may have illicit activity tracked to their IP address if a Privatix VPN user does something illegal while using the exit node. Privatix says they provide exit node operators with a document that transfers responsibility to Privatix. However, this argument may not hold up in a court of law, since the exit node operator personally facilitated an illegal activity for monetary gain.

The Mysterium Network is another project that is quite similar to Privatix. Idle bandwidth is rented out to VPN users in exchange for Mysterium Tokens (MYST), which is an ERC-20 token on the Ethereum blockchain. Like Privatix, the Mysterium Network utilizes blockchain technology to establish one of the first VPN-based virtual economies.

Mysterium is essentially saying that the data will be ripped apart and encrypted into unintelligible gibberish within the network, and somehow this will solve the exit node identity problem. The reality is that an IP address is required in order to use the internet, whether it be your actual IP address, the IP address of a VPN server, or the IP address of a peer on a dVPN network. Essentially, when a VPN is used for illegal activity, someone’s IP address will be associated with the illegal activity, and this is especially true when using a dVPN network where all the exit nodes represent actual people.

It remains to be seen how the exit node problem will be solved, and indeed this is the biggest problem preventing the maturation of dVPNs. At this point, users can sell their unused bandwidth to VPN users, but is the money earned from selling that bandwidth worth the risk of being identified as an IP address that conducts illegal activity?

In summary, dVPNs would be the ideal evolution of VPN technology via providing truly anonymous and trustless services, as opposed to current VPN providers which are centralized, opening up multiple ways for a user’s identity to be compromised. Two early attempts at dVPNs are Privatix and the Mysterium Network, which are in reality centralized VPNs, but have succeeded in creating VPN-based virtual markets that are powered by blockchain technology, turning unused bandwidth into a profitable commodity. The holy grail for Privatix and Mysterium would be a resolution of the exit node problem, where users who sell bandwidth have their IP address attached to the possibly illegal activity that occurs over VPNs. At this time it is unknown how exactly the exit node problem will be resolved, but in a future where this problem is resolved, dVPNs would provide the ultimate level of internet anonymity, enhancing the flow of information and freedom across the world.

The post Decentralized Blockchain-Based VPNs Have the Potential to Increase Anonymity and Establish VPN-Based Virtual Economies appeared first on BitcoinNews.com.