The Bitcoin mining hash rate has seen an explosive and nearly exponential increase long term, rising through 1 GH/s in July 2010, 1 TH/s in 2011, 10 TH/s in 2012, 1 PH/s in 2013, 100 PH/s in 2014, 1 EH/s in 2016, 10 PH/s in 2017, and as high as 80 PH/s in July 2019, equivalent to 80 million TH/s and 80 billion GH/s. This rapid rise in mining hash rate has been partially fueled by the price of Bitcoin increasing from USD 0.01 in 2010 to over USD 10,000 currently, causing people around the world to compete to get a share of the lucrative Bitcoin mining block reward, which amounts to over USD 100,000 every 10 minutes currently. The other reason that Bitcoin’s hash rate has been rising so rapidly is that the demand for mining technology has caused manufacturers to develop mining rigs with the newest, most powerful, and most efficient technology. 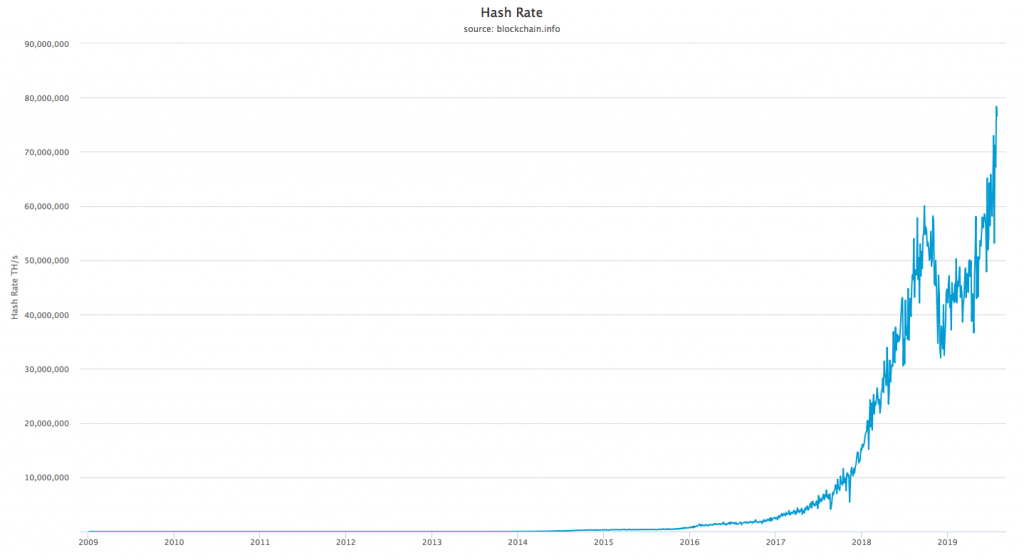 For example, 7 nm chips, meaning the transistors on the chip are 7 nm in size, are the most powerful chips used commercially today. By November 2018, Bitmain had already released mining rigs which utilize 7 nm chips. This was a major jump for the company, since previously 16 nm chips were the best that Bitmain offered. Currently, the most powerful mining rig that Bitmain produces is the Antminer S17 which has a hash rate of 53 TH/s, and this far exceeds the Antminer S1 which had a hash rate of only 0.18 TH/s.

We are officially announcing the release of our new 7nm miners which possess industry-leading hash rates designed to mine with the SHA256 algorithm. Two models will be offered, the Antminer S15 and T15. Available for purchase on 11/8. pic.twitter.com/m6HbWGZS1O

The increase in energy efficiency that results from mining rigs using chips with smaller and smaller transistors is what has paved the way for the explosive rise in Bitcoin mining hash rate. This is because the profitability of Bitcoin mining is primarily determined by the electricity cost, so if energy efficiency had not drastically increased from smaller transistors, then the profitability per hash rate would be much lower. Thus, the total Bitcoin mining network hash rate would be much lower in the absence of transistor size decreases.

Transistors will have to become smaller and smaller on chips in order to sustain the nearly exponential long term increase in Bitcoin mining hash rate. However, quantum tunneling is a problem for chips with transistors smaller than 7 nm.

Quantum tunneling can be explained by the concept of wave-particle duality. Essentially an electron, which is the fundamental building block of all computer systems, is both a particle and a wave simultaneously. For transistors of 7 nm and bigger an electron stays in its appropriate channels, and the computer functions properly. However, for transistors smaller than 7 nm, the wave nature of an electron can cause it to literally pass through barriers in a transistor, causing leakage of electrons.

In simple terms, if a transistor is small enough, then an electron can teleport through the physical barriers in a transistor. This results in the computer not functioning properly.

The immediate effect already being felt due to quantum tunneling is that Moore’s Law is breaking down. Moore’s Law states that the number of transistors on a chip doubles every two years, leading to an exponential long term increase in computer processing power. However, as transistor sizes decrease below 7 nm it is taking longer and longer to research, develop, and mass produce the evolved next generation of transistors.

Notably, 3 nm transistors are only expected to bring a 20% increase in power and performance, versus the 30% to 40% increase seen during previous transistor evolutions.

Essentially, scientists are developing completely new technologies in order to combat quantum tunneling and to try to stay on pace with Moore’s Law, but the time it takes to develop smaller transistors is increasing, and most importantly, these next generations of transistors are bringing lesser improvements in energy efficiency and processing power.

Also, it is possible that scientists could perfect quantum computing, which would allow Moore’s law to continue. That being said, quantum computing is still in its embryonic stages, and major technology companies are generally focused on making smaller classical transistors in order to increase the power and performance of computers, at least for now.