Although we see a sharp green candle which should please the eyes of Ethereum buyers, we are still wary. Yes, buyers were able to cope with the first problem on their way – with a price mark $225, which they enchantingly broke in the first hours of the new day. But when comparing the activity of Ethereum and Bitcoin buyers, we can clearly see that Ethereum buyers are much more passive: 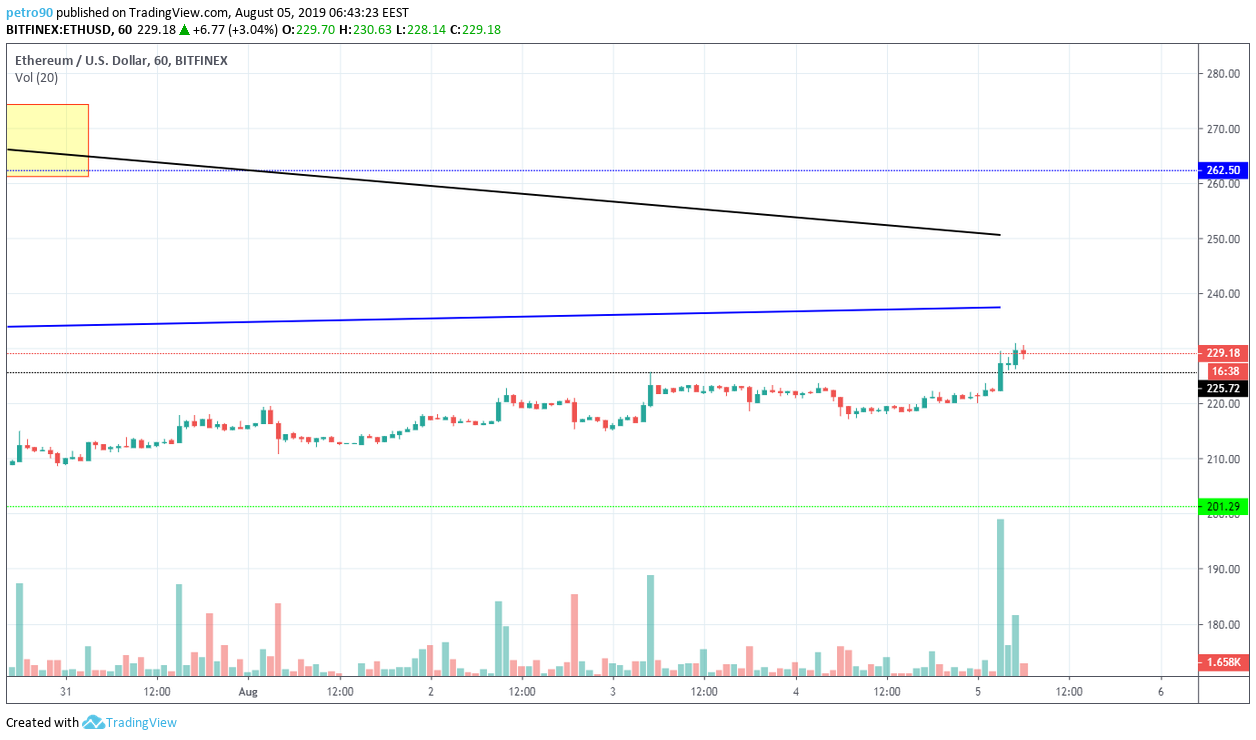 To begin with, it can be seen that the price is still in consolidation and buyers failed to break the price $235. Unlike Bitcoin buyers who have coped well with their upper limit and are moving to the next target. The situation is repeated. With the growth of Bitcoin, other coins, including ETH, do not have the strength to grow as aggressively because there is not enough volumes in the market. Accordingly, investors pour their deposits from other coins into Bitcoin. It is also evidenced by the chart of ETHBTC: 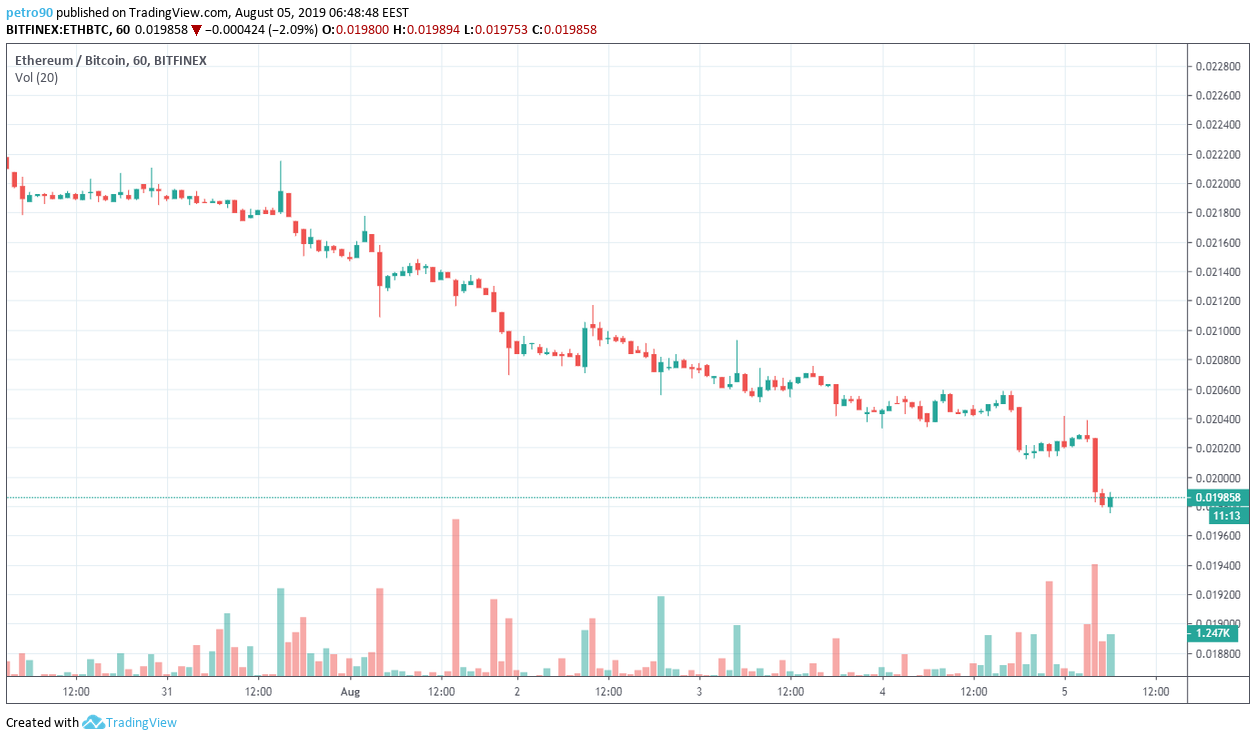 In this situation, during the growth of Bitcoin, Ethereum behaves passively, but during Bitcoin fall, Ethereum falls more aggressively.

As it is now initiative of buyers, it is worth considering the targets of likely growth continuation. As we have discussed the targets of the fall in our previous analysis and they remain relevant. If buyers have the strength to fix above $235, then their main target is $260-270: 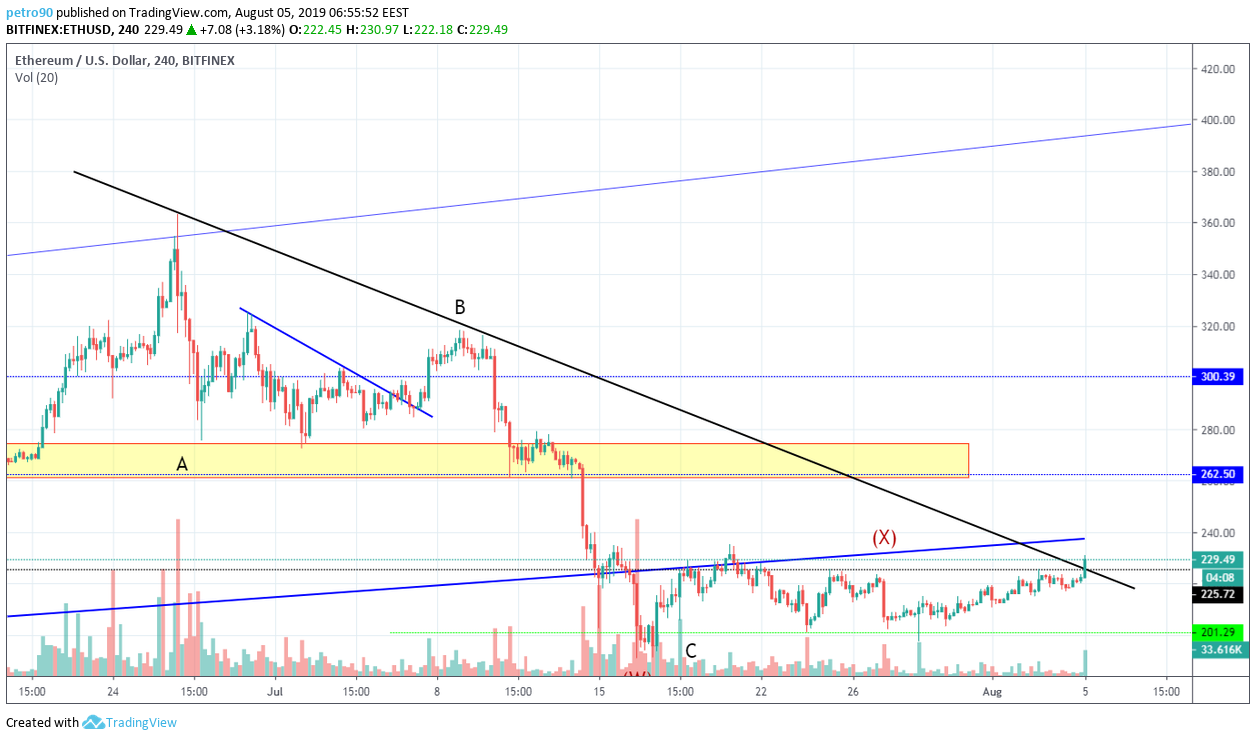 The chart also shows that buyers are trying to fix above the black trend line which sellers have been keeping since 26 June.

As for the marginal positions of buyers, they could not fix above the dashed growth channel which was broken 2 days ago. However, buyers were not disappointed and began a new attempt of sharply increasing of marginal positions: 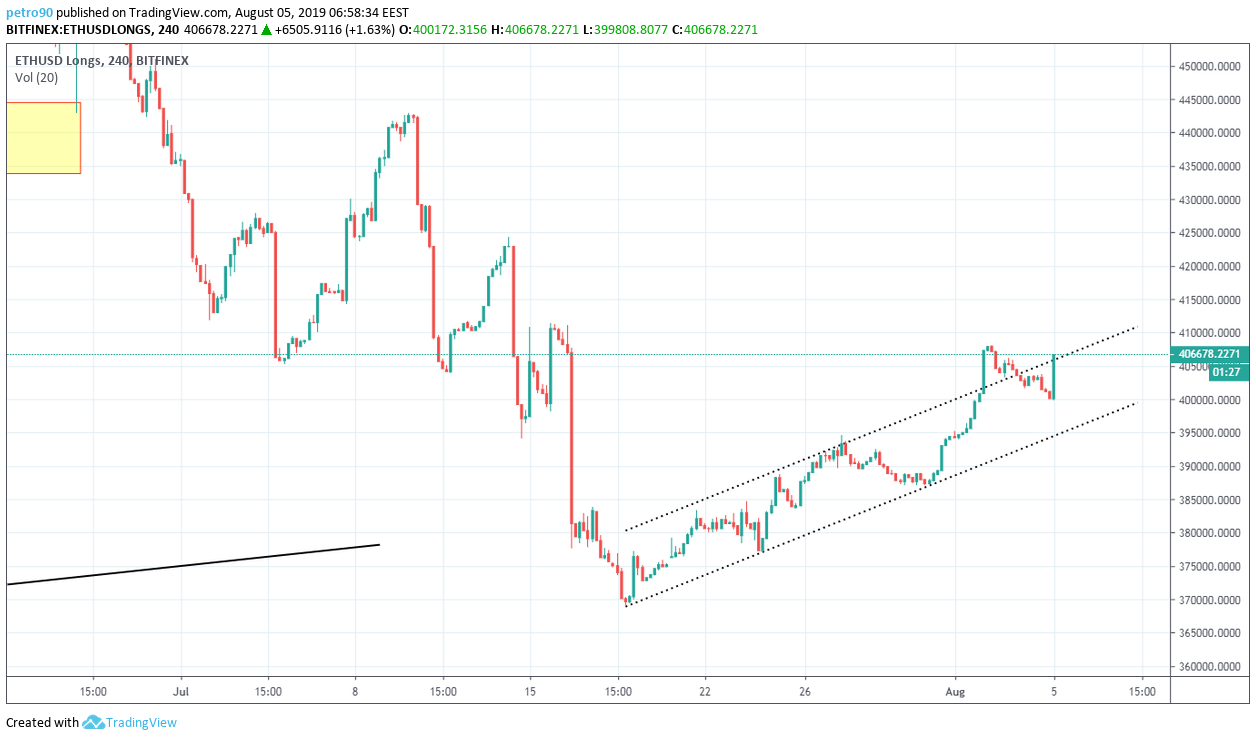 But sellers are feeling uncomfortable. Their marginal positions have been steadily closing since 2 August: 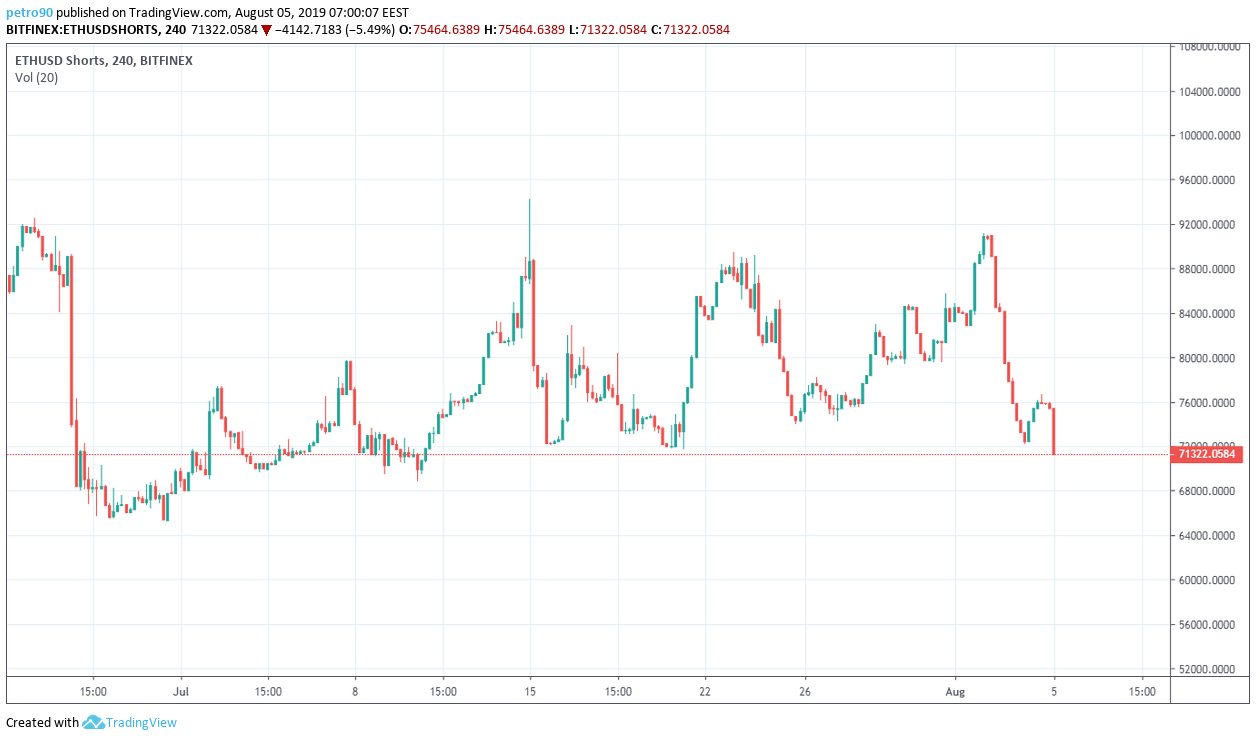 According to the wave analysis, sellers have corrected their half-year growth by 61.8% and so far sellers have no strength to continue the fall: 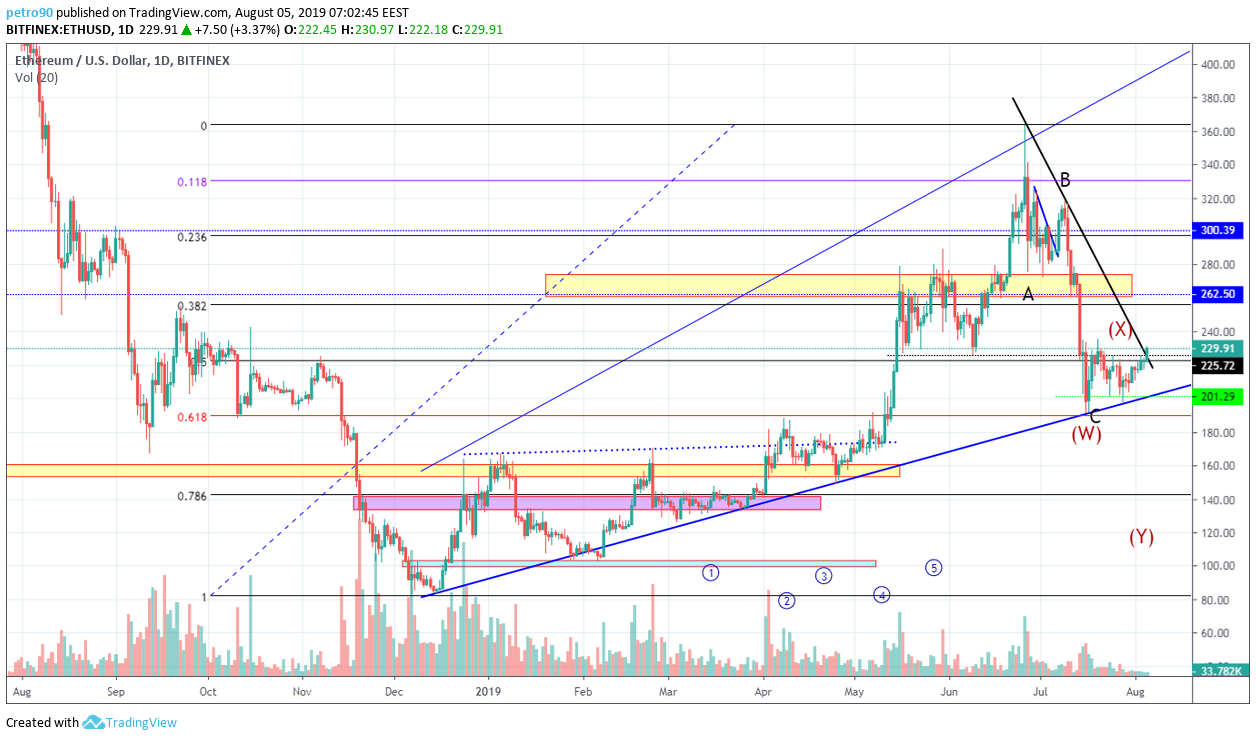 Therefore, if we talk about a new wave of growth and if buyers fix above $235, then $260 is the first probable price stop. But the first problem for buyers should arise at $300: 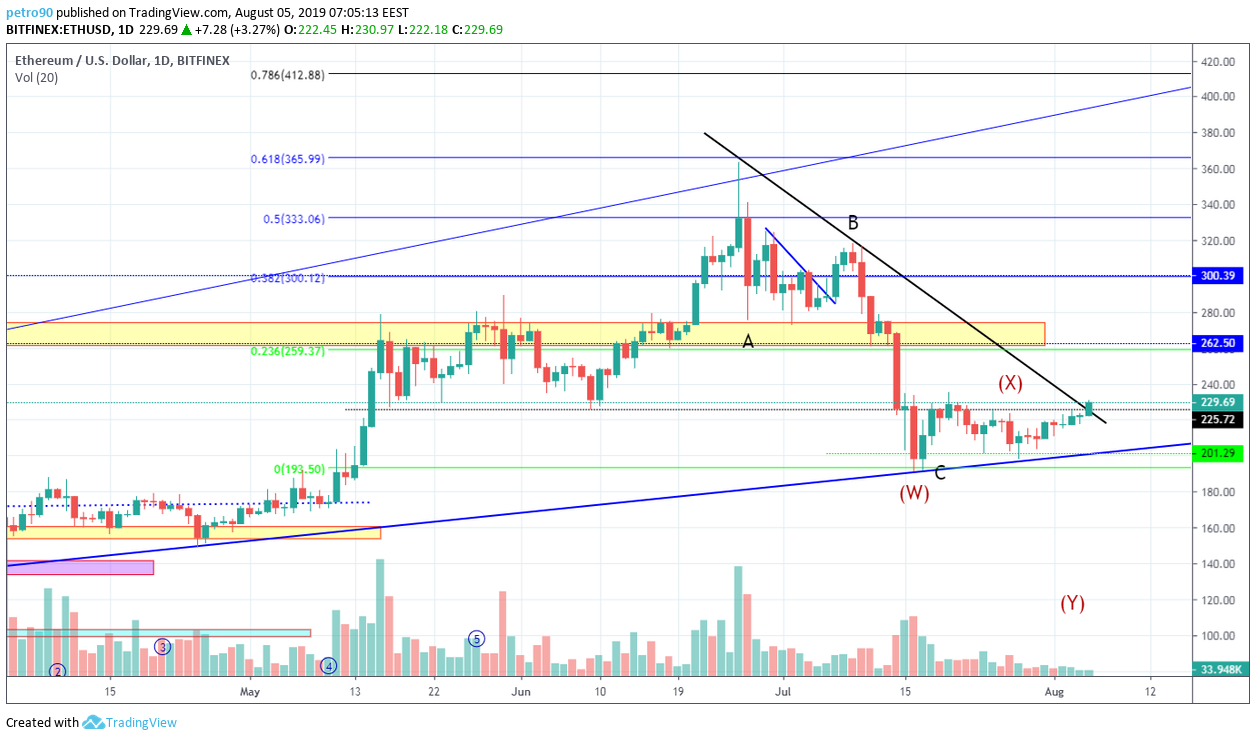 The previous week was marked by particular passivity and low volumes. Looking to the beginning of this week, we should be waiting for the emotional trading. Meet us on Wednesday and see if buyers have been able to get $260, or $235 is their possible maximum yet? Have a lucky week!