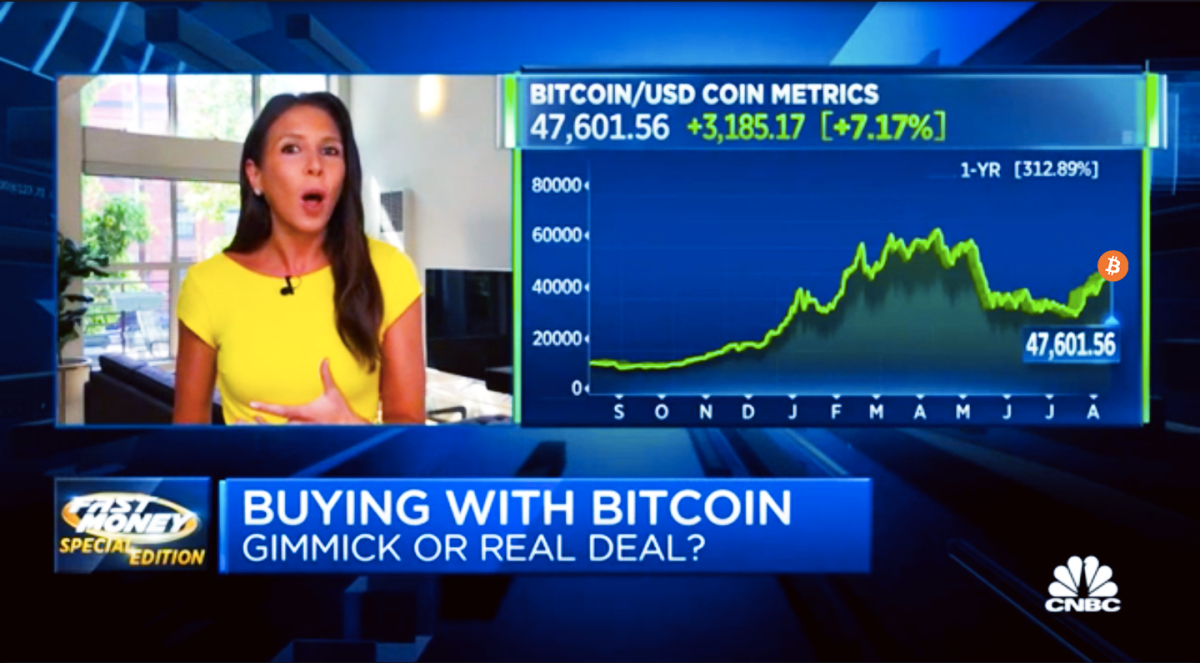 A recent CNBC.com video dealt with the current use cases for Bitcoin in the U.S., featuring a conversation discussing the merits of bitcoin as a currency. Non-surprisingly, many mainstream misunderstandings were showcased.

“People aren’t really using bitcoin to buy everyday items, and that is partly due to the fact that not a lot of retailers give them the option to spend it,” said CNBC.com digital correspondent Mackenzie Sigalos in the video. “You do have [some companies] that will let you use your crypto wallet directly in their website or in person but this is the exception to the rule.”

Bitcoin usage as a medium of exchange –– the role of money on which the mainstream line of thought primarily focuses –– is very often debated. Most people argue that since bitcoin’s price in U.S. dollars is quite volatile, it isn’t suited to be used for everyday transactions. Consequently, they erroneously conclude that bitcoin is not money. However, money has more functions than just being a medium of exchange; it historically follows a monetization path as its awareness and adoption increase worldwide.

“Historically speaking, such a generally esteemed substance as gold seems to have served, firstly, as a commodity valuable for ornamental purposes; secondly, as stored wealth; thirdly, as a medium of exchange; and, lastly, as a measure of value,” wrote marginalist economist William Stanley Jevons.

Sigalos also said that “at the moment bitcoin really is just seen as a store of value asset.” Such a statement could be seen as bad news for some and is often repeated with excitement by the mainstream media but showcases how bitcoin is undergoing full monetization as nascent money.

Bitcoin is indeed peer-to-peer electronic cash; it was created to solve the double-spend problem and bring cash to the digital realm without the need for trusted intermediaries. However, it is still young, having been created only a little over a decade ago. If most people who know about or have bitcoin already see it as a store of value, as Sigalos said, it is great news. Bitcoin is currently becoming a well-established store of value with many high-profile investors opting to get BTC exposure –– after many years of being seen only as a collectible, gimmick item.

If adoption keeps increasing and is currently growing faster than internet adoption, Bitcoin will progress towards the last two roles of money in its monetization path. As more people get to know bitcoin, use it, and accept it, it will become more well-established globally. Consequently, it will naturally become a medium of exchange and, later, a unit of account (a measure of value). We must put Bitcoin’s history and current stage of monetization into perspective. While the entire world doesn’t realize that BTC is the best money ever created, Bitcoiners can enjoy stacking more sats.

Nonetheless, bitcoin is already a powerful medium of exchange outside the U.S. financial privilege bubble. In developing countries worldwide, where economic policies are wreaking havoc on citizens’ purchasing power, BTC is providing an option to peacefully protest and opt out of a broken system. In Palestine, for instance, bitcoin could become a currency of freedom. Additionally, Nigeria, Sudan, and Ethiopia are concrete examples of places where bitcoin is bringing many benefits to citizens. And in El Salvador, bitcoin has already been deemed legal tender, obtaining the official currency status there.